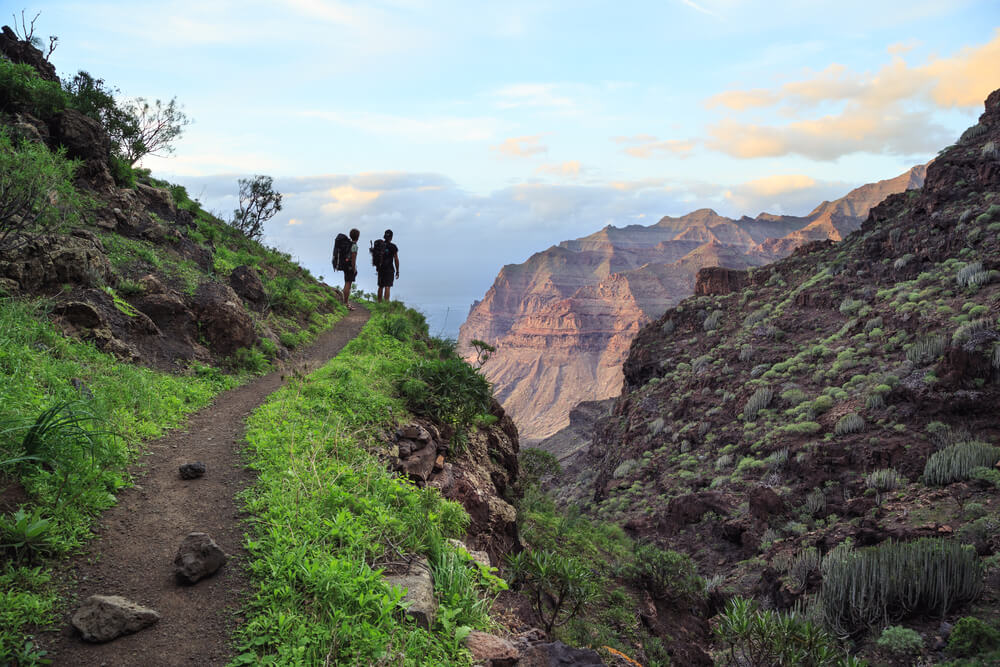 Gran Canaria es una isla en la que se puede encontrar una gran diversidad de paisajes, con Gran Canaria is an island where you can find such a great diversity of landscapes that you will not see it in any other part of the archipelago. The royal paths of Gran Canaria will make you discover unique corners that otherwise cannot be seen, while experiencing the beauty of these landscapes with their nuances due to the great variety of microclimates and microsystems that are home to the different villages.

Gran Canaria is way more than a destination of sun and beach. Even of festivals, so important for economic and tourist development of the island. It hides much more, places with a special charm, with landscapes that will catch you from the first minute thanks to those royal paths that cross the island from end to end and the variety of vegetation that you can find along the way.

Therefore, in this article we want to show you those royal paths that are more attractive, unknown to the tourists that visit the island, and that reveal secrets and unique landscapes.

The royal paths have been completely restored in recent years. Many of them were the main roads along which the ancient inhabitants of the island used to travel on their way to other villages.

However, time and abandonment caused their deterioration to the point of having to be rescued. Royal paths start from an epicentre, the Cruz de Tejeda, and from therethey are dispersed, from north to south and from east to west.

There are almost 700 kilometres of protected paths, many of which are accessible or have been restored for walking on, while others are more difficult to access or walk on, being in areas where climbing becomes the main activity.

Next, we are going to show you the 5 most important royal paths of Gran Canaria and the their importance over the years in connecting the different villages of the island.

It is one of the most important routes of the island that connected all the region of the south with the north, crossing all the network of ravines of the area within the island. It was also one of the transit routes for muleteers and farmers who brought their produce to all the towns on the summit and the coast.

The route begins in the western part of the Caldera de las Tirajanas, always heading south, entering the pine forest itself to reach the hamlet of Las Tederas, in the course of the ravine. In some sections of this royal path in Gran Canaria, you can appreciate beautiful views of the whole ravine with the sea in the background.

A path that goes from the municipality of Artenara to the village of San Nicolás. This is one of the oldest paths, used by the ancient inhabitants of Artenara to link the village with those of the western or north-western region.

It is about 20 kilometres long and it takes about 7-8 hours to walk it, with a difference in height to take into account. It goes from the highest point at 1,900 metres to be at sea level, especially for those who are not very used to walking on these paths.

The path is in perfect condition and does not present a great difficulty. The diversity of landscapes that the hiker encounters along the way makes it one of the best routes on the island, with a marked contrast between humid, leafy landscapes and more desert-like places.

It is one of the royal paths of Gran Canaria that will take you through the two great dams of the island. The route begins at the Salto del Perro dam, located very close to the GC-605 road that goes from Mogán to the Las Niñas dam, following a path of irrigation ditches that leads to it.

One of the attractions of the route is that from one point along the way, you can enjoy a spectacular view of the Soria dam and the entire hydraulic network that exists to take advantage of the scarce water available in this part of the island.

In addition, you will find volcanic bubbles, some of which are quite large, caves used for grazing both to keep livestock and as a refuge for the shepherds themselves.

This is one of the non-circular walking routes in Gran Canaria, so you must retrace your steps if you want to return to the starting point.

It is not a very hard path, except for the unevenness at the beginning, 300 metres in the first kilometre, while leaving Fataga behind. The rest of the path is not very difficult.

The most spectacular thing about these Gran Canaria royal path is that, at the end, you will be able to enjoy spectacular views of the Fortaleza de Ansite fortress.

It is a little known but very varied route, passing through different landscapes with a variety of vegetation (walnuts, pines, chestnuts, etc.) that make it a more than attractive route.

The departure takes place in Fontanales towards the Los Pinos de Gáldar pine forest, connected with the routes of the cheese factories of Moya. On the way we can find herds of sheep and goats that graze in the area.

Conclusion: the royal paths are the arteries of Gran Canaria

The royal paths that run throughout the island were the main routes by which its inhabitants moved from one place to another. As there were no roads, these paths became the main arteries of Gran Canaria, connecting the capital with the midlands or the south.

Over the years, these paths gradually gave way to the modern roads we know today,even being abandoned.

In recent years and thanks to the efforts of the institutions, some of these paths have been recovered, cleaning and equipping them to recover one of the signs of identity of the island, to be enjoyed by both inhabitants and tourists.