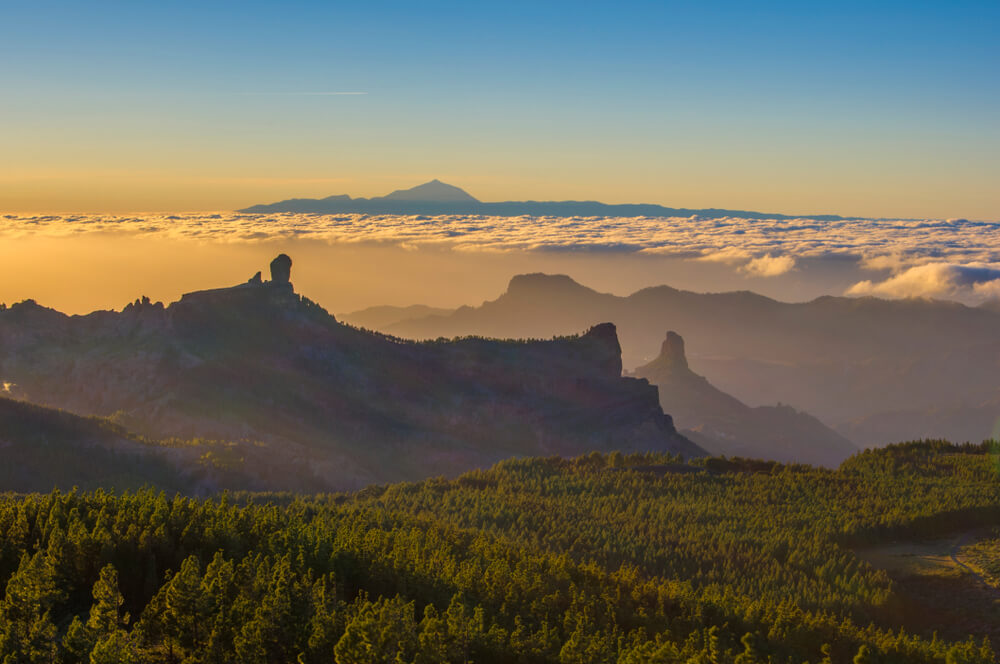 Pico de las Nieves is a not so well known natural attraction of Gran Canaria, an island also called the ‘miniature continent’ by its diversity of landscapes. Thus, although the island is famous for its amazing beaches, Tamarán (as the ancient aboriginal named it) hides many secrets.

The highest point in Gran Canaria with 1,949 meters above sea level is located in the geographical center of the island. This place with a singular history has always been the protagonist of many local legends.

Its name, literally Peak of Snows, is due to the proximity of three wells that were built at the beginning of the 17th century, with the aim of storing snow that had fallen in the winter.

In addition, this place is ideal if you are a nature lover, as many hiking or cycling routes end here, allowing hikers or cyclists contemplate stunning views of the surroundings such us those of the Caldera de los Marteles or the Llanos de la Pez, among others.

Of course, if there is one thing that the center of the island has for everyone is calmness. In fact, the interior of Gran Canaria is like another world compared to the most crowded south where thousands of visitors are almost permanently.

Where is the Pico de las Nieves?

The cumbre (as the locals refer to the top of Gran Canaria) is located specifically among the municipalities of Tejeda, San Mateo and San Bartolomé de Tirajana. Furthermore, it is inside the three protected areas of Paisaje Protegido de las Cumbres, Monumento Natural Riscos de Tirajana and the Parque Rural del Nublo.

Around this spectacular natural monument can be found two of the symbols of Gran Canaria – the Roque Nublo and the Roque Bentayga. Obviously, in order to appreciate the essence of a place and soak up its atmosphere there is nothing better than getting to the highest lookout point in Gran Canaria.

The uninterrupted views out over the UNESCO Biosphere Reserve, with its multitude of deep valleys and jagged ridges shrouded with vegetation and crowned with spectacular rocks are worth a visit.

A quote by the late 19th century French anthropologist René Verneau, defines the summit thus: “It is etched out in every sense by deep depressions and made pointy by volcanic peaks... It is such a tormented place, with its great black rocks and immense cracks that spill out in all directions, and would have an even wilder appearance if it weren’t almost completely covered by vegetation”.

How to get to Pico de las Nieves?

As you advance to the mountainous center of Gran Canaria, you will witness a extraordinary view of the spectacular central massif and its commanding high peaks, which you may have already seen from afar. Scenic, narrow roads climb past tiny, enchanting villages, narrow terraced fields, high plateaus, deep ravines and peculiarly-shaped basalt rocks.

En route you will pass lush, sub-tropical vegetation including exotic fruit and eucalyptus trees gradually substituted by pines, holm oaks, bushes and shrubs at higher altitudes. Its access can be made through different options. The most used are the following:

From Maspalomas or Playa del Inglés

If you come from southern Gran Canaria, you can get to the top of the island through two ways. The first is taking the GC-60 road to Fataga for 18 kilometers and then continuing to the top for 29 kilometers leaving Tunte behind.

If you’re not a fan of curves, you can choose other alternative. Take the GC-1 highway to the north for 30 kilometers and the exit to El Carrizal. Then follow the signs to Ingenio and continue to the top for 26 kilometers leaving La Pasadilla and Cazadores behind.

If you come from the capital of the island, the fastest way to get to the top is through the villages of Santa Brígida and San Mateo (famous for their local markets) for 40 kilometers.

Gran Canaria is an island of tremendous landscape contrasts, which allows to have very different viewpoints and unique beauty. There’s a stone semicircle right by the car park that points towards the setting sun and the simple lookout point offers uninterrupted views of the sunset.

Here you can get great views on cloudy days as Gran Canaria’s peaks and the Teide (the highest peak in Spain with 3,718 meters above sea level located in the neighboring island of Tenerife) can be seen floating on the sea of clouds.

Furthermore, to the northwest the Macizo de Tamadaba stands as the guardian, joined by the Macizo de Amurga to the southeast. The area has an oasis of pines planted in the 1950s that precedes the blue sea of the Atlantic Ocean.

The summit is part of both the rims of Caldera de Tejeda to the west and the Caldera de Tirajana to the south. It forms the boundary between these two huge erosion craters which are the result of large landslides as well as the more regular activity of wind and rain.

It’s important to know that the peak is partially open to the public, as the Spanish Armed Forces have some facilities around that are strictly forbidden to the civilians.

In short, Pico de las Nieves is a natural attraction in an island as diverse as Gran Canaria. Are you ready to discover the less known side of a paradise that attracts thousands of visitors every year?