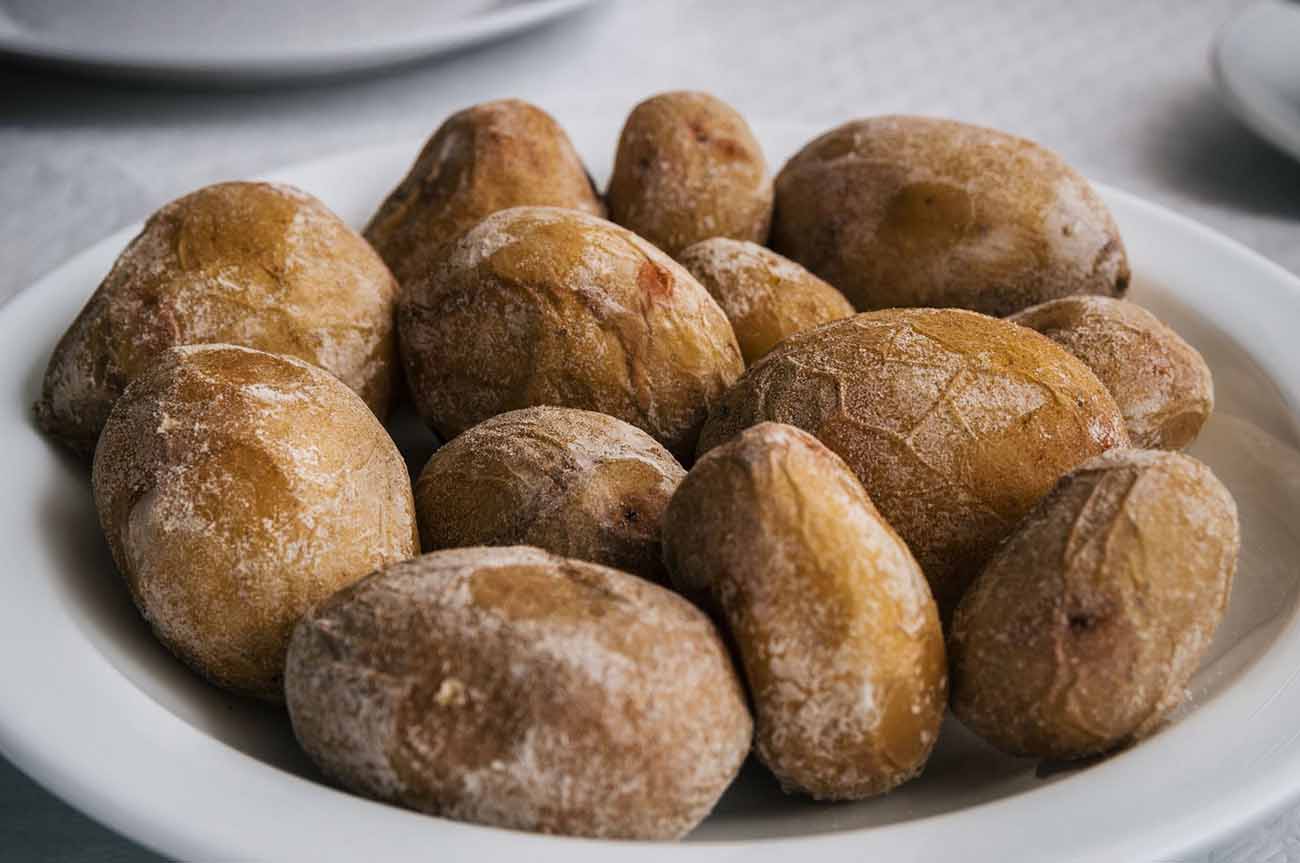 10 Gran Canaria foods you can't leave the island without trying

If you think Gran Canaria locals like to feast on paella and Spanish omelette, you'd be right. But these two foods weren't born on the island. The chefs who prepare these dishes are imitating those from Valencia and beyond.

So what are the foods most emblematic of Gran Canaria? Here are 10 you need to fit in trying. Make time before arrival and departure to sample them all.

Old people have arrugas (wrinkles) in Gran Canaria and so do new potatoes. Whilst age and, no doubt, the sun cause the wrinkles on the island's seniors, new potatoes earn theirs by being boiled in excessively-salty water. Legend has it that the natives used to actually cook these unpeeled papas in Atlantic Ocean water.

Remember it's papas and never patatas on Gran Canaria. The latter's so penisular, don't you know? The spuds are spiced up with a piquant mojo rojo, whose exact ingredients vary from kitchen to kitchen but always include cumin, garlic, and paprika.

Another food to be accompanied by mojo on Gran Canaria is the lapa (limpet). Except chefs partner lapas with mojo verde rather than mojo rojo. The green comes from coriander replacing paprika in the holy trinity of the ingredients.

Picturesque settings for trying this tasty tapa include La Oliva at La Puntilla end of Las Palmas de Gran Canaria's Las Canteras beach. For even more fantastic Atlantic views, try them at El Atlante. This popular stop-off's reached not long after heading out from the capital, in the direction of Agaete on the GC-2.

Canarians are generally taller and stronger than their counterparts on the Spanish mainland. Whilst this might have something to do with their Berber heritage, the influence of gofiomust not be underestimated. This toasted cornmeal's added to children's milk to ensure they grow up big and strong.

Gofio turns up with just as much regularity on the island's restaurant menus. In gofio escaldado where the addition of a typically fish stock scalds the cornmeal and you scoop the resulting sludge in your mouth with chunks of sweet red onion. And as a dessert, be it helado de gofio (ice-cream) or mus de gofio (mousse).

For a perfect family day out on Gran Canaria, head to Gáldar's Sardina del Norte. Here, you can take your pick from a small but uniformly excellent selection of bars and restaurants. All serve sardinas (sardines).

Believe it or not, but some fish and seafood served in Gran Canaria eateries is frozen rather than fresh. In Sardina del Norte, you can rest assured the sardines are the main catches of the day. Served grilled with a wodge of lemon to squeeze over them, they're one of life's simple pleasures.

Firgas' status as one of the wettest municipalities on the island and its locals' penchant for potaje de berros way are in no way unrelated. This dish translates as watercress stew. So enamoured by this hearty vegetable are the good people of Firgas, that they even hold a fiesta in honour to their main cash crop.

They certainly like their greens on Gran Canaria. For watercress also turns up in the classic sandwich de berros served hot or cold, with or without cheese. Visit Las Palmas de Gran Canaria's El Buen Comer to sample their watercress alioli.

In Tejeda, they make their stew with wild rocket rather than watercress. Potaje de jaramago's a signature dish of the restaurant at the Cruz de Tejeda's Parador. It's also sold as street food at stalls set up as part of the municipality's Fiestas del Almendro en Flor, celebrating the blossom flowering from the area's almond trees.

In the west of the island, Tasarte to be precise, they prepare their ropa vieja in a different way to elsewhere on Gran Canaria. For the ingenious chef at the beachside La Oliva replaces beef and chicken with octopus.

Pulpo's no stranger to the blackboards of bars and restaurants dotted on and around the rest of the island's shoreline. Pulpo frito's fried octopus, for example. Whereas Pulpo a la gallega is octopus Galician style, boiled and served al dente.

Flower cheese is produced in the eastern municipality of Valsequillo. However, it's more associated with Santa María de Guia and the neighbouring north-west municipalities of Gáldar and Moya. Guía has an annual Fiesta del Queso where you can indulge your love of everything cheesy.

Head to Santa María de Guia's La Quesera if you want to try before you buy. Typically, the Guía version is made with sheeps' milk curdled with the juices of the artichoke thistle. Some dairies add gofio or paprika to the mix.

The Canarian banana is distinct from its South American cousin in that it's smaller and sweeter. They're allowed to ripen on the tree longer than those from South America because the export time is shorter. The water shortage on the island also makes them retain their small size.

There used to be banana plantations in the centre of Las Palmas de Gran Canaria, in Arenales. Nowadays, the closest you'll find them is leaving the Barrio de San Nicolás as you head in the direction of Santa Brígida along the Barranco de Guiniguada. Travelling by bus to the likes of Arucas and Moya will see the bus driver getting so close to the planations, the leaves of the trees brush the vehicle.