Spending 5 days in Gran Canaria is more than enough to discover the most important places in this paradise island where the sun always shines. The reason for this eternal summer? The Azores High and the trade winds (or easterlies).

These are two factors that contribute to Gran Canaria being also known as the “miniature continent” by its diversity of landscapes. In fact, here you can contemplate the neighbouring Teide peak at the top of the island and then taking a dip at the beach…

The best part of it is that Gran Canaria is located just 100 kilometres off the northeastern African coast in the middle of the Atlantic Ocean and just a couple hours flight away from the European continent.

As the island is one of the top tourist destination in Spain (being the second most visited country in the world for many years), Gran Canaria Airport LPA receives endless flights from national and international airlines every day.

Therefore, you won’t have any problem to get to Gran Canaria whenever you want. So, the real question is when are you coming to this subtropical paradise! Villa Gran Canaria’s new blog article will show you the best things to see in Gran Canaria.

What to see during 5 days in Gran Canaria

Although Gran Canaria isn’t the largest or the most populated of the Canary Islands, the truth is that this is the most varied one. Here you can enjoy such a high number of landscapes that you will realize why is like a tiny continent.

Are you ready to hike through lush forest, wander the streets of a modern and cosmopolitan city or enjoy the sun at stunning beaches and natural swimming pools while tasting an amazing gastronomy like no other? 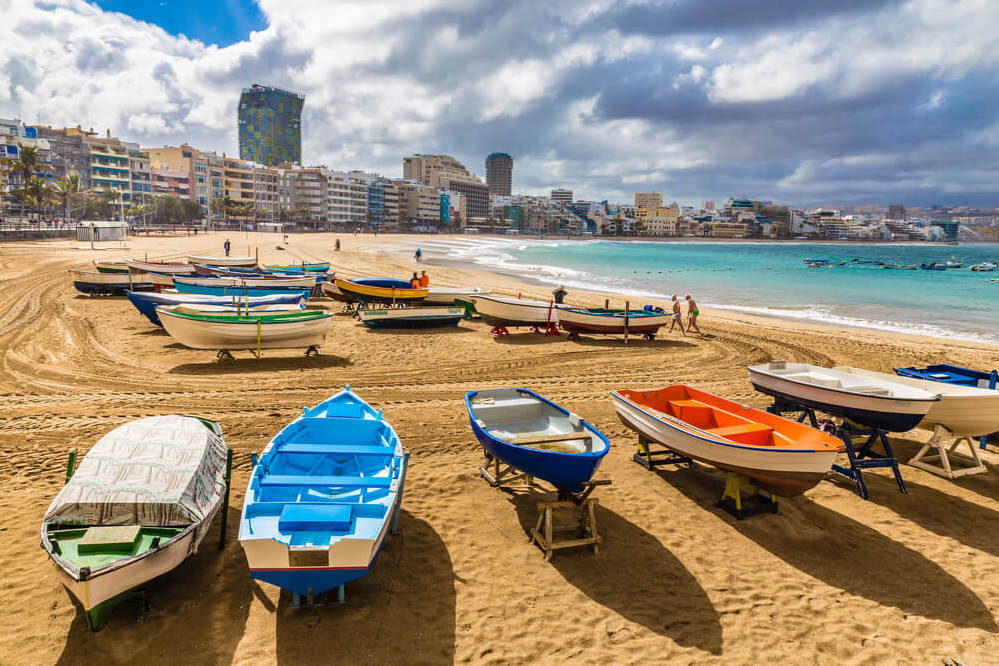 The capital of Gran Canaria (and also the Canary Islands along Santa Cruz de Tenerife) is a multicultural city full of culture. Proof of this are the historical quarters of Vegueta and Triana, where the city was founded.

Don’t leave the island without visiting the Casa de Colón museum (where the famous sailor Christopher Columbus stayed during his voyages to the New World), the Teatro Pérez Galdós theatre (named after the leading literary figure in 19th-century Spain, considered second only to Cervantes in stature as a Spanish novelist) or the busy Calle Mayor de Triana street.

Of course, walking along the 4-kilometre promenade of Las Canteras, one of the best urban beaches in the world, is a must during your 5 days in Gran Canaria. Here you can enjoy plenty of services in a unique beach ideal for families on the eastern part and for surf lovers on the western part. Contemplating the sunset next to the Auditorio Alfredo Kraus auditorium (a tribute to the distinguished local tenor) is an experience you won’t forget! 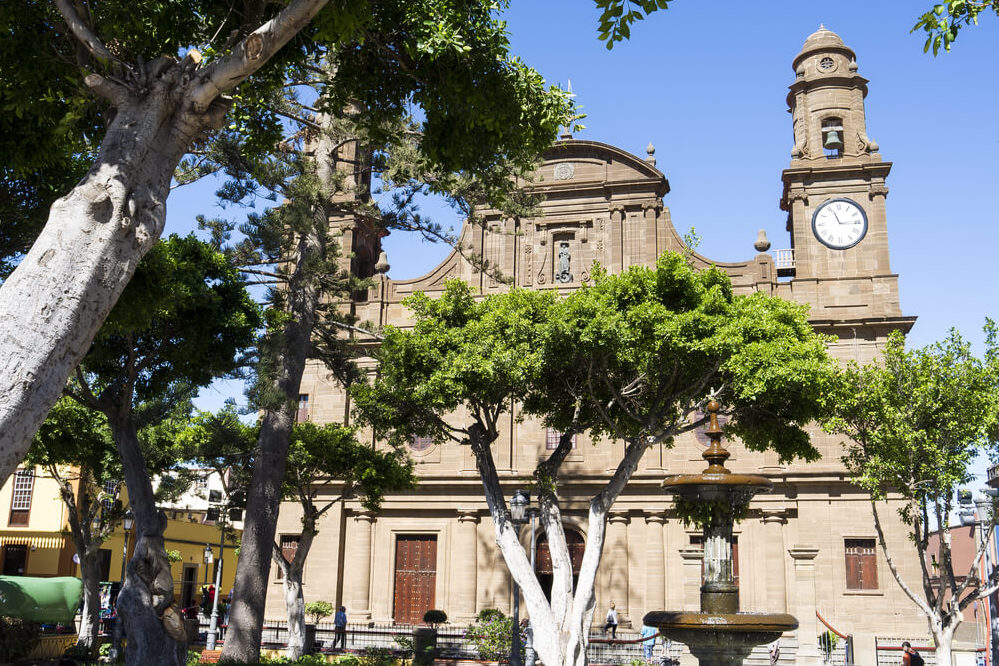 Gáldar, along with Telde, was one of the two kingdoms of Tamarán (as the ancient aborigines called the island) before the Spanish conquest. It shows part of its ancestral past in the Cueva Pintada Archaeological Park, one of the major cave painting finds in the Atlantic region.

The Iglesia de Santiago de los Caballeros is one of the most beautiful churches in the Canary Islands, serving as a link between the Baroque style and the first examples of neo-classicism of the Archipelago. Here the conquered people were first baptised. 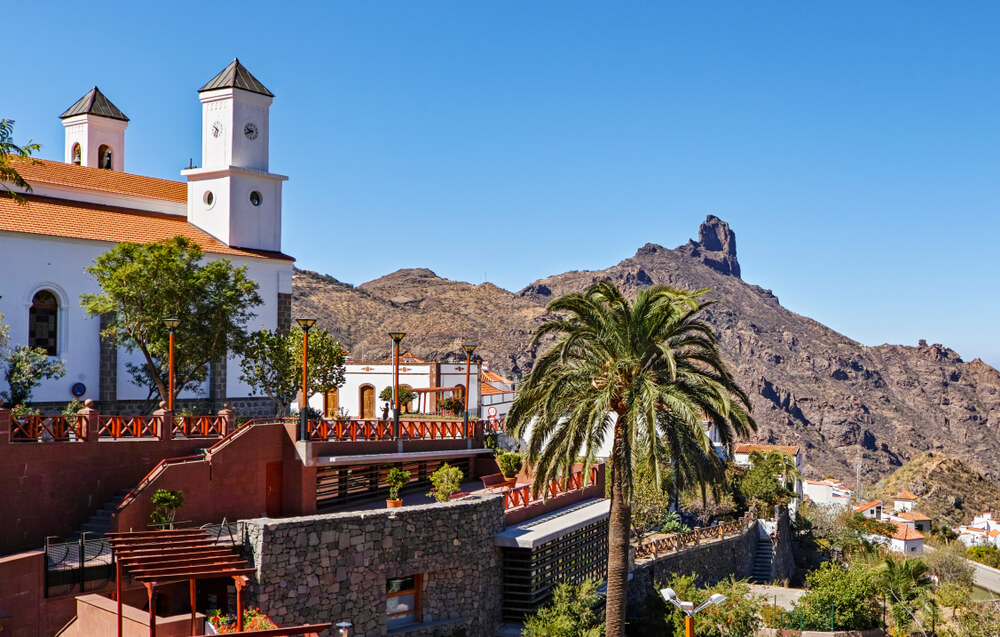 Tejeda is the true essence of a traditional Canarian town. Its whitewashed hosed with red tile roofs and little gardens full of potted flowers can give you a general idea. Located at the top of the island next to the impressive Roque Nublo and Roque Bentayga rocks and surrounded by valleys, this is the perfect place for a rural retreat far from the stressing everyday life.

It’s a must stop during your 5 days in Gran Canaria, so let the beauty of the mountains and the natural charming of the area soothe your troubles away while hiking through the old caminos reales (royal paths). 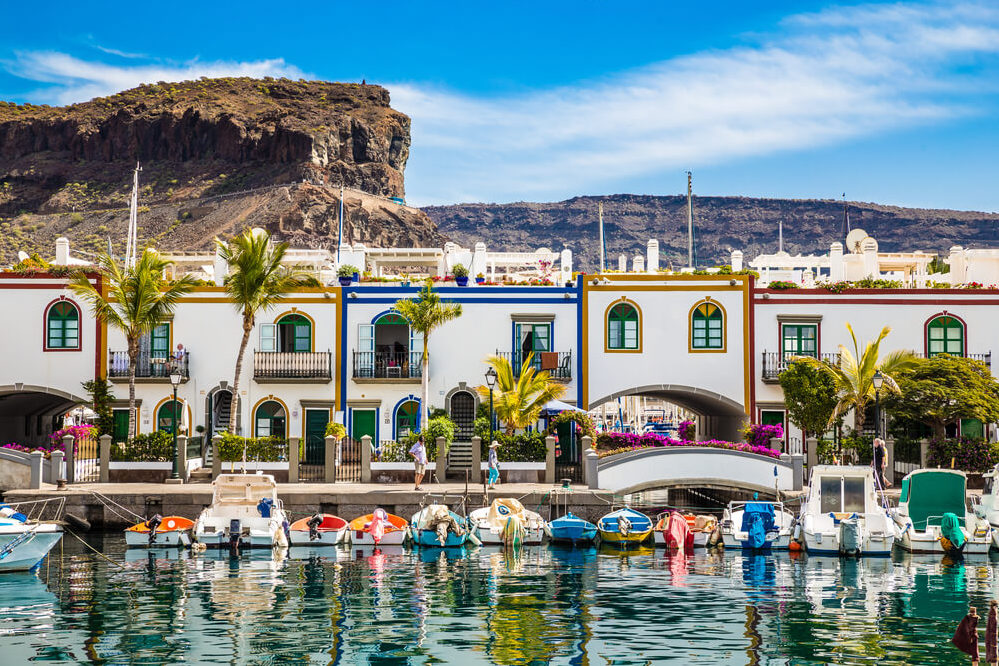 Mogán is an area with a long marine tradition due to its unique setting and natural beauty. Not in vain, it has evolved into one of the most beautiful urban settlements of the Canary Islands. Its spectacular architecture contrasts with its flowery gardens and bridged canals (in fact, Mogán is also known as the Venice of the Canary Islands).

One of the reasons why Mogán attracts many visitors is that if has more sunny days that almost any other resort in Europe. This explains its laid back, friendly atmosphere and the sunny outlook of the locals. Are you ready to feel happier by connecting with childhood memories of idyllic holidays by the seaside? 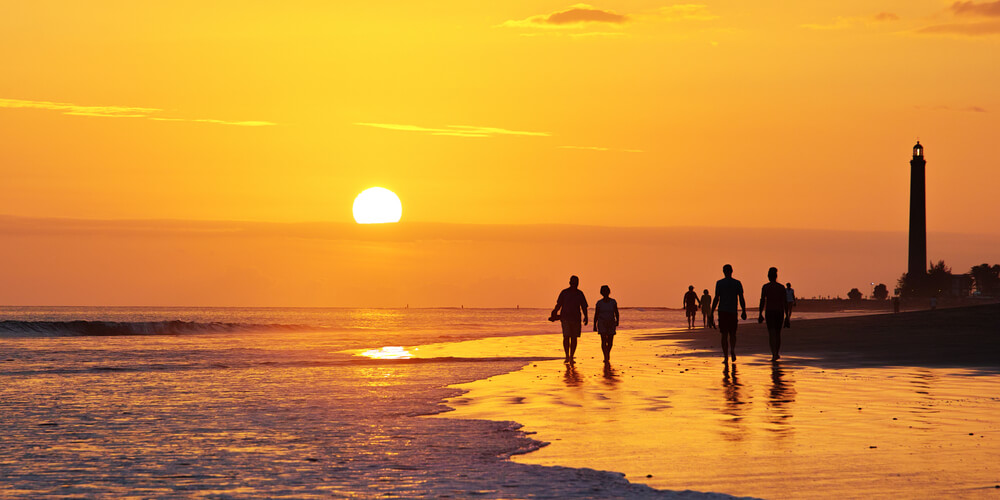 Maspalomas is a unique place in Gran Canaria. Its famous 400-hectare dunes system has a wide range of ecosystems, including a palm grove and a brackish lagoon with abundant wildlife. The famous beach of Maspalomas enjoys calm seas and three kilometres of golden sand.

The beach has sections for everyone, family-friendly services such as lounger and parasol rental, showers and snack stands to water sports and nudist areas… Your 5 days in Gran Canaria won’t be complete if you don’t experience a romantic plan like heading to the dunes in the evening and watching the sun set behind Maspalomas lighthouse!

As you can see, Gran Canaria is an island with lots of things to see and do. Of course, you can enjoy a great part of it in 5 days, but there ara many hidden secrets you should discover in detail.

In short, Gran Canaria is a fantastic family destination with almost 60 kilometres of beaches and a Biosphere Reserve in the west. It's a miniature continent where you'll find things to do that make every day special.

What are you waiting for to enjoying your 5 days in Gran Canaria and living an unforgettable vacation on an island that won’t let you down?
Did you like this article? Share it!
PreviousNext