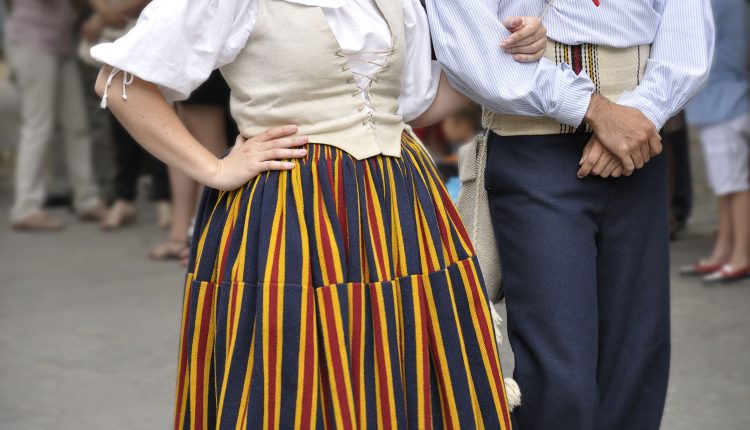 The typical costume of the Canary Island is included in a set of traditional dress styles that have been preserved as the most representative of the archipelago, expressing with total fidelity the cultural identity of the islands.

Obviously, not all traditional Canarian costumes are the same ones. While some are similar to those worn in the past, others have elements from different historical periods and others were created practically from 0.

The Typical Canarian dress is still evident in popular festivals and celebrations, such as the famous Canarian pilgrimages, as well as in the costumes of Canarian folklore and different cultural groups.

Of course, there are small peculiarities that allow the inhabitants to be distinguished according to the island (sometimes even from different regions or localities of an island).

It should be noted that they are very similar to the typical costumes of the Portuguese islands like Madeira and the Azores, which form part of the geographical region of Macaronesia together with the Canarian Islands and the Cape Verde.

Over time, locally produced fabrics made from three materials have been used to make Canarian costumes:

Canarian costume depending on the island

The traditional female costume of this island consists of a cylinder with a large oval cup, a brim and a black headband with a bow at the side. Underneath is a coloured tissue which is knotted under the chin on formal occasions.

The large-diameter short-sleeved shirt has fine pleats, the sleeves are made of local wool and decorated with sewn-in ribbons, very plain embroidery and colourful buttons. They reached over the elbow and the sleeves of the shirt were inserted into them.

As for the men's clothing of this typical Canarian costume, it consists of a conical cap that sometimes stands upright and sometimes falls to the side. The breeches are short, wide and have tassels at the mouths of the legs. They also have buttoned gaiters made of leather or wool in raw, brown or black.

The Canarian costume in Fuerteventura is the most attractive of all. The typical female costume consists of a typical wide-brimmed hat made of Canary Island palm leaves, skirts with hemstitching in the shape of a coat and a petticoat. The footwear is essentially black boots.

As for the typical male costume, it consists of a cone-shaped hat (very similar to those of Lanzarote and Gran Canaria), cap, linen shirt, striped sash, linen underwear, waistcoat, gaiter, and mayos.

The typical costume of Gran Canaria is famous in its female version for its colourfulness, with white and red standing out. The skirt is striped and has a small embroidered apron at the top. A piece similar to the corsets of other times is attached to the waist and torso. On the head there is a long scarf that reaches to the waist, accompanied by the typical female hat. It is a sign of the typical costume of Gran Canaria.

In the men's version of this traditional Canarian costume, white, black and grey predominate. The shirt is white or beige, smooth or with grey stripes. There is also a black waistcoat (often grey) and underwear, which can be black, grey or beige with fine lines. A striped or red sash is worn at the waist. The traditional costume is usually accompanied by a conical hat decorated with upright tassels or with the cone down.

We continue with the Canarian costume of La Gomera. The typical Canarian dress of the woman from La Gomera consists of a white petticoat with red ribbon embroidery at the waist, a red skirt and a blue wool skirt. The top is a white blouse, a black bra and complementary garments like a yellow scarf and a hat with blue seams. Black boots are worn as footwear.

The man's costume consists of black trousers reaching over the ankle, a white blouse, a black waistcoat and a red sash. The shoes are made of cotton with socks.

The typical female costume from La Palma has an embroidered shirt with similar trimmings as the underside of the wool petticoat (large stitches and wide pleats at the waist). A scarf is also used.

For the men, the costume consists of a cap with attached wings, shirt and underwear with embroidery, a long waistcoat in bright red, gaiters with large reliefs and a red sash. This is undoubtedly a very recognisable Canarian regional costume.

The Canarian costume of the women from Lanzarote is characterised by the use of the semi-circular headdress made of fine linen. It is decorated with an oval cylinder and flat barrels of normal size. It is complemented by a "justillo" (a small hat), a striped skirt and sometimes by decorative aprons. It is one of the most curious typical costumes of the Canary Islands.

As for the typical traditional male dress, it consists of a short, tight, black silk waistcoat with wooden buttons. The underwear (locally called "nagüetas") is made of white cotton with hemstitching. It is edged with a wool belt.

All this is complemented by a cap that partially covers the mouth, a pointed cup and a small visor. The shirt is made of cotton and linen in different areas and decorated with a delicate flower embroidery. It is a very beautiful typical Canarian costume.

The traditional women's costume of Tenerife consists of a woollen skirt woven on a loom, which, depending on the area, has a red or black base with coloured longitudinal stripes. Under the cotton or linen skirt a taped and embroidered petticoat is worn and above it a taped and embroidered apron. The shirt is made of the same material and has a black or red embroidered bodice at the top. On his head he wears a hat with scarf.

The traditional men's clothing of Tenerife consists of embroidered linen leggings, black wool trousers, red sash and white shirt embroidered with cotton or linen. The waistcoat is also made of wool. Sometimes it is accompanied by a typical "Esperancera" cape.

In short, the typical costumes of the Canary Islands are further proof of a traditional culture and full of customs that are still present in the popular events of all the islands and which fill all the inhabitants of the archipelago with pride.