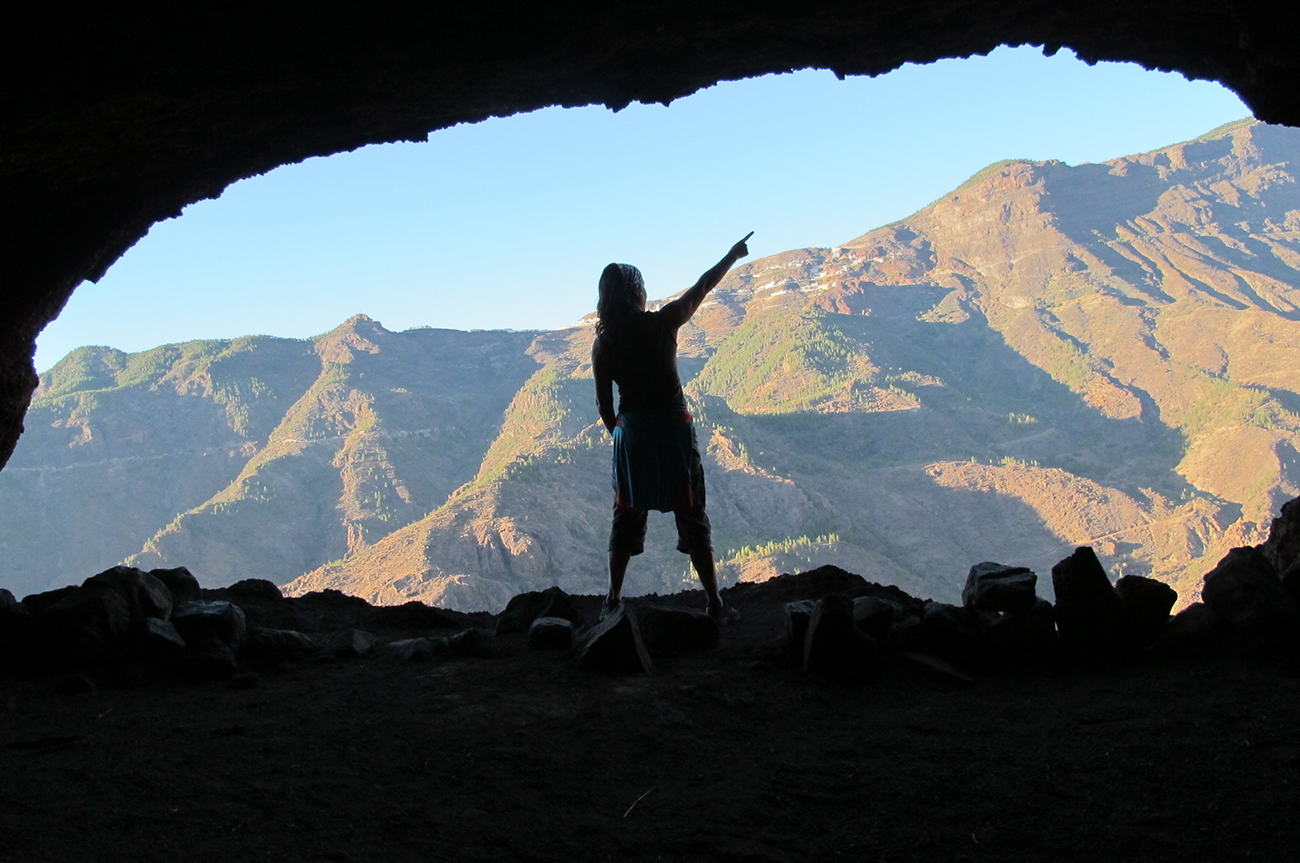 The 6 most incredible Gran Canaria caves you should visit

One of the most exciting things about Gran Canaria is that there is a wide variety of things to do on the island. When you are planning your holidays in Gran Canaria, we know that most of the people automatically think about the shining sun, the wonderful beaches, or about its famous mojo picón sauce.

But there is a marvelous sightseeing out there waiting for you to discover it. What about exploring a cave? We know that this is not for everyone, but we are quite sure that you are here because this is exactly what you were looking for.

Let us tell you about the most incredible Gran Canaria caves you should visit.

The White Caves are set in the protected nature park Parque Rural de Doramas. These Caves have over 80 years of history and they have a surface area of 300 square meters. At their early days, the Caves were used as a shelter for cattle - like cows and sheep - and for storing crops and agricultural tools.

Apart from that, they also count on the amazing view of the sea and the mountains. It is extraordinary.

Nowadays, the White Caves are also being used as rural houses for those who want to fully enjoy nature. The walls and ceiling have been lined with gunite. The bedrooms, bathrooms, kitchens and dining areas have been painted white, adding luminosity and beauty to the Caves.

They maintain a constant temperature between 19 and 20 degrees throughout the whole year thanks to their thick walls and unique architecture. The White Caves have 5 bedrooms, 4 bathrooms, 4 living areas, a gaming room, a Minibar, an inner courtyard, and 2 kitchens.

They are the perfect choice for groups, celebrations, and retreats for up to 15 people.

Then, if you are looking for something different, this is a great opportunity to live nature as you have probably never done it before!

Cuevas del Rey, or the Caves of the King in English, are located in Tejeda, an area in the center of Gran Canaria island.

The Tejeda depression arose from a volcanic crater, standing over which is a mountain crowned by several rocky promontories, such as the Nublo rock, an enormous chunk of basalt which is the symbol of Gran Canaria, and the Bentayga rock, where you will find the Cuevas del Rey (Caves of the King).

This is a sacred site in pre-Hispanic times which contains cave paintings.

The caves are composed of three nuclei, constructed in an unusual straight-line archaeological formation.

Here we can find important examples of dwelling caves, burial areas, granaries, areas for worship and an important “almogaren” (a religious site). They are definitely one of the things to do in Gran Canaria and one of the sights to see!

Acusa Seca is a town located northwest of the island of Gran Canaria, in the municipality of Artenara. It is a visit that is worth undertaking because as you go deeper into the island you can see the significant landscape change, leaving behind the beaches and penetrating the mountains in one of the highest points of the island over 900 meters high.

Don’t forget to stop at the different viewpoints that you will find along the climb to enjoy the scenery more leisurely.

Acusa Seca is mainly known for its unique caves, Cuevas de Acusa Seca, that once were the scenery chosen by the aboriginals as the place of residence and development of life in general. They were forced to go into the mountainsdue to water shortage in the plains which made crops and grazing a challenge.

The Acusa Seca Caves were one of the first populated areas of the island and, ever since, some of the caves have been the houses of some islanders, who enjoy the stunning views of Roque Bentayga and Roque Nublo from their rustic homes.

Nowadays, you can visit some of the Acusa Seca caves and see the role that each of them had in the past. Some notable ones are the room caves where they used to live, the grain storage caves, the painted caves, and even burial caves.

The remains found in the burial caves have been moved to Museo Canario for its significant historical value, dating from 570 A.D.

As we have said before, the natives of the island continued using the caves even after the arrival of the colonizers, even building a shrine in one of the caves, known as La Cueva de San Juan. Currently, Acusa Seca welcomes visitors not only because of its caves but also because of the beauty of its landscapes.

In addition, there are trails for hiking and mountain biking from where you can admire the flora and fauna of the area such as thistles, pine forests, the moro bird, and lizards among others.

If you visit Acusa Seca, we suggest you replenish some energy tasting the local products such as honey, prickly pears, potato bread, and maize with goat’s cheese and wine from Artenara. We promise you that this visit will leave a good taste in your mouth!

The Painted Cave in Gáldar

Cueva Pintada (The Painted Cave) is a small cave with geometric paintings from the Ancient Guanches, which is unique on the island of Gran Canaria. The Cueva Pintada museum is located in Gáldar. Being the ancient seat of the Gran Canarian Guanche kings, the area was considered to be of great importance by the Spanish.

After the Spanish invaded and finally succeeded in beating the Guanche Canarians, claiming the island, an event which took them many years to complete, they built a new Spanish town over Gáldar and the Cueva Pintada remained lost until recent history.

The Cueva Pintada museum has several rooms which were once used as cave houses by the Guanche people of Gran Canaria.

Several walls were built inside the Cueva Pintada museum when it was originally dug out by the Guanches, from basalt or tufa without mortar and the cave may have been used by more than Guanche family.

The ancient cave dwelling Guanches didn't have furniture, because they didn´t make furniture as we know it today. You will see when you visit the Cueva Pintada museum, that they had a tradition of carving their furniture into the structure of the rock when they dug out their caves.

The designs and shapes painted on the walls inside the Cueva Pintada museum may have been used to represent female fertility or simply decoration, perhaps they were a form of religious belief or perhaps ceremonial.

The fact is that the real meaning of the Guanche symbols is still unknown.

For a while recently, the caves at Cueva Pintada museum were closed because it was discovered that light was bleaching the paintings, raised humidity coming from water seeping through the rock and from body heat were all working together and slowly destroying these historically valuable paintings.

After the modernization of the Cueva Pintada museum, now you can see that the paintings are covered with a layer of glass to protect them. Inside the museum, which now is part of the whole site, you can take a virtual tour of the caves and with the clever use of display cabinets you see many of the Guanche artifacts that were discovered during the excavations of Cueva Pintada.

So, if you want to learn about how they used to live, this is the perfect chance to get to know the Guanches!

The evergreen Barranco de Guayadeque stands out as one of the most magnificent valleys of the island. Cacti, agaves, poppies, palms, Canary Island pines, and almond trees, as well as more than 80 endemic species, grow in abundance on steep slopes.

The neighboring towns, Ingenio and Agüimes, get their water from a stream running through this ravine.

This valley, which in prehistoric times was the most populated on the island, provides the setting for one of the most important pre-historic burial grounds, where the dead were buried in inaccessible caves.

The Guanches – the original inhabitants of the Canary Islands - later used these caves to dwell in, to store food and as sites for fertility rituals. In the 19th century, after locals started plundering the graves and selling much of their archaeological finds to the Museo Canario in Las Palmas, this area became a designated nature reserve to protect it from further devastation.

The Barranco de Guadayeque is also home to the biggest lizard species in the world, the Lagarto Canarión. We could say that this area is a paradise for serious walkers, where there is a lot to explore in organized groups or alone.

As the surfaced road continues past the Guayadeque museum, you can enjoy the magnificent sceneries of this valley even without much physical effort.

This route passes through two cave villages – where modern-day people settled to follow the footpaths of the Guanches – with tiny chapels, a bar, and a basic restaurant, and ends at the Tagoror, the famous cave restaurant, where both local wine and traditional folk music accompany your meal.

Are you going to miss it?

The Mogan Caves are situated just to the right of Puerto de Mogan. This time, our caves are going to be a bit different because this time, they are under the water! Mogan Caves have an entrance to two small caves which are located at around a depth of 10 meters. The maximum depth is 15 meters.

The caves are known for light-shy marine life hiding in the darkness. All these factors make the Mogan caves unique and very special.

As we have said before, Mogan Caves are located at Puerto de Mogan – also known as ´Little Venice´ - this place has been the destination for a lot of painters who have found their way here to relax, but also to paint in the beautiful alleys and streets. Here you can still experience peace and tranquillity without interruptions from partygoers. So, disconnect, relax and enjoy the wonders of these caves diving in Puerto de Mogan!

Isn’t it quite clear why you should enjoy your holidays on this side of the island yet?

I don’t believe it! But if so, get in touch with us through our website Villa Gran Canaria. We are looking forward to meeting you!