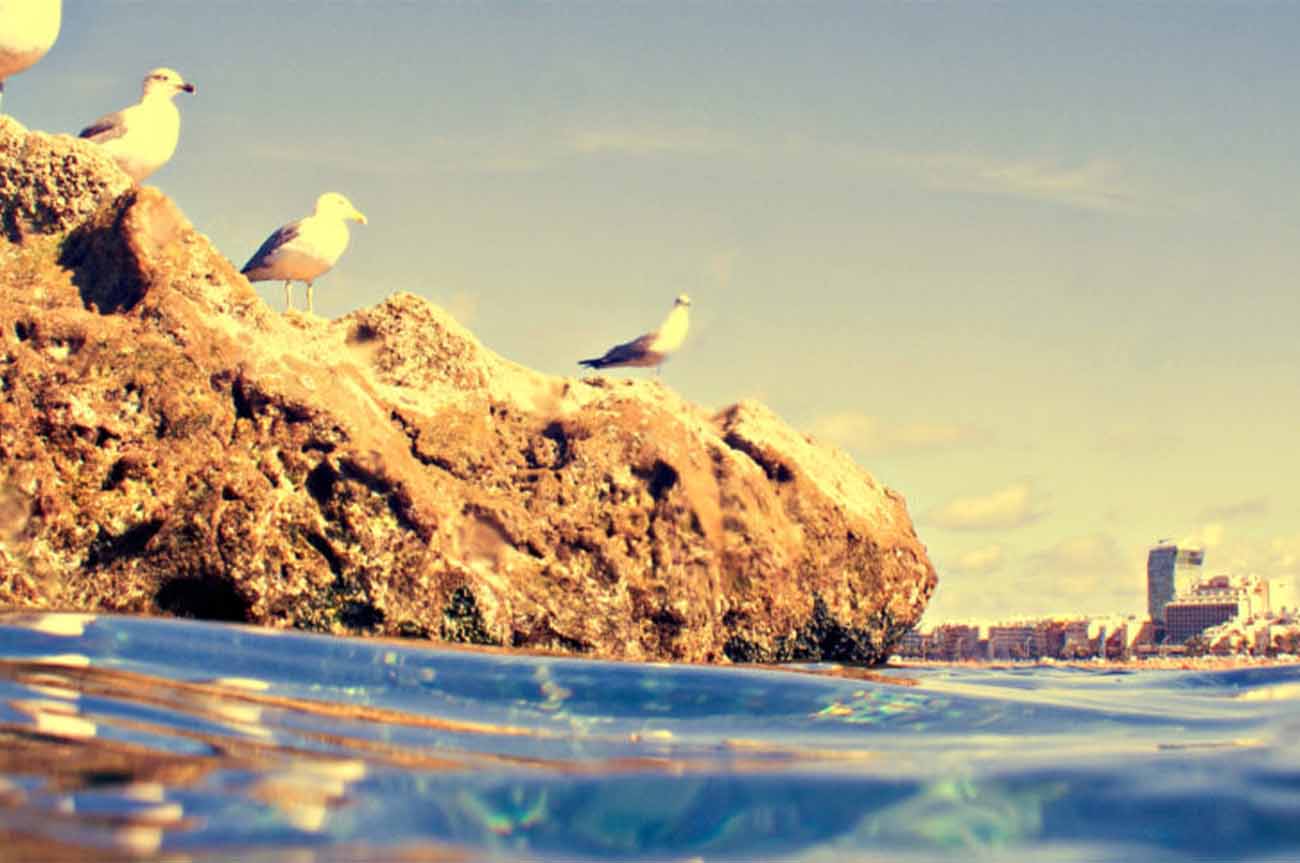 Gran Canaria's coastline adds up to 236 kilometres of shore. And that equals plenty of dive sites. Some are directly accessible from the 80+ beaches on the island whilst others are further out and easier reached by boat.

Whatever your level of diving ability, Gran Canaria has a site to match your prowess. If you're an absolute beginner, there a number of schools where you can learn how to dive. These, like the sites themselves, are dotted around the island. OK, without any further ado, here are our top 10 GC dive sites.

As well as being arguably one of Spain's, if not the world's, finest urban beaches, Las Canteras is a great dive site. The shallow waters towards the middle of the 2.8km stretch of sand are perfect for beginners. They are also popular with people snorkelling.

There's a barrier reef, the Barra de Las Canteras, which makes this section of the beach so calm. You can dive to depths ranging from eight metres to 18 metres (26-59 feet) with visibility ranging from 15-20 metres (49-66 feet). The fish come close to the shore, particularly near Playa Chica, and not only because locals feed them bread.

You'll reach Tufia by turning off the GC-1 at El Goro. It's well signposted and, in addition to being a hamlet, it boasts one of the most charming beaches on the east of the island. Lying adjacent to Tufia's beach is the Playa de Aguadulce.

After parking your motor in the free car park, head down the steep path to the beach. Take advantage of GC's volcanic beginnings in the various sea caves formed by molten lava cooled by Atlantic waves. Here, you'll find stingrays.

The pick of Gáldar's beaches is also where many diving schools initate newcomers to the wonders of the ocean not so deep. There are plans for changing rooms to be constructed at this north-west playa which is also striving for Blue-Flag status. Such is its popularity with watersports enthusiasts.

Look out for seahorses on your dive. Along with angel sharks. Don't worry, they don't bite. They do though appear to sport halos, hence the name.

You'll need a 4x4 to reach this dive spot in the east of Gran Canaria, one of only three marine reserves in the Canary Islands. This means that more than 400 species of underwater flora and fauna are protected. Just don't expect to see them all in a single dive.

Sardines are easy enough to spot if diving here, whilst you're less certain to see tuna as they are only occasional visitors to El Cabrón. The natural arches, caves, and tunnels are not going anywhere soon, however. Do bring provisions with you as bars and cafes in this area are conspicuous by their absence.

You'll need a boat, plus an Advance Open Water Diver certificate or equivalent, to even contemplate attempting this amazing dive. This dive spot's distinctive rock formations have earned it its nickname of The Cathedral. A 20-minute trip from Las Palmas de Gran Canaria's El Muelle Deportivo (sports harbour), a marina to you and me, prepare to drop from a depth of six metres all the way down to 40.

El Pajar is one of Gran Canaria's less picturesque beaches, given it looks out to a cement factory. However, apart from that, it's part of a largely unspoilt fishing village in the south west of the island. Plus the views under the sea are a true sight to behold.

Especially, if you travel out 15 minutes by boat. Where you'll be able to see the wreck of a Russian hydrofoil ferry which sank in 2003. Look out for the barracudas circling what once a 30-metre long vessel, along with the jet engines and passenger seats.

Puerto las Nieves, the port of north-westerly Agaete, used to house a geological curio called El Dedo de Dios. However, November 2005 brought Tropical Storm Delta, which snapped off God's finger. The nickname for a relic of the oldest part of the island, formed roughly 14 million years ago.

Las Merinas though survived. This group of underwater rocks rise to the surface, more or less directly under where El Dedo de Dios used to stand. Suitable for beginners, the maximum depth you can reach here is 12 metres.

Access this dive site by way of a shingle beach at the south-east's Arinaga. An anthesis to the popular resorts located further down the coast, you'll find more locals than tourists in this part of the island. Head away from the rocks close to the beach to find a sandy area teeming with cuttlefish and octopus.

You'll be able to tuck into friends and family of the marine life you'll see in a post-dive feast. As Aringa's home to some of the best seafood restaurants on the island. Restaurante Nelson, for example, includes erizo de mar (sea urchin) on its extensive menu.

The sea grass which you'll negotiate on this 50-minute dive close to Telde's Melenara beach is home to both bream and parrotfish. Easily accessible to the shore, Taliaret's perfect for novice divers. You'll descend to a depth of five metres to begin with, and not go lower than eight.

Look out for spider crabs. Nocturnal divers will be rewarded with a sight of rock lobsters. Squid are visible too, as they feed in the shallower waters when the sun goes down.

Pasito Blanco is located off the old coast road which connects Maspalomas to Puerto de Mogán. The one which most motorists now shun in favour of using the newly extended GC-1 motorway. You'll need to allow just over an half hour for the boat ride to reach this volcanic reef.

With a maximum depth of 19 metres, this is not a site for virgin scuba divers. Water temperature dips to 20 degrees centigrade in winter, rising to a high of 25 in summer. Keep an eye out for moray eels in this coral reef. Pasito Blanco is also home to many stingrays.