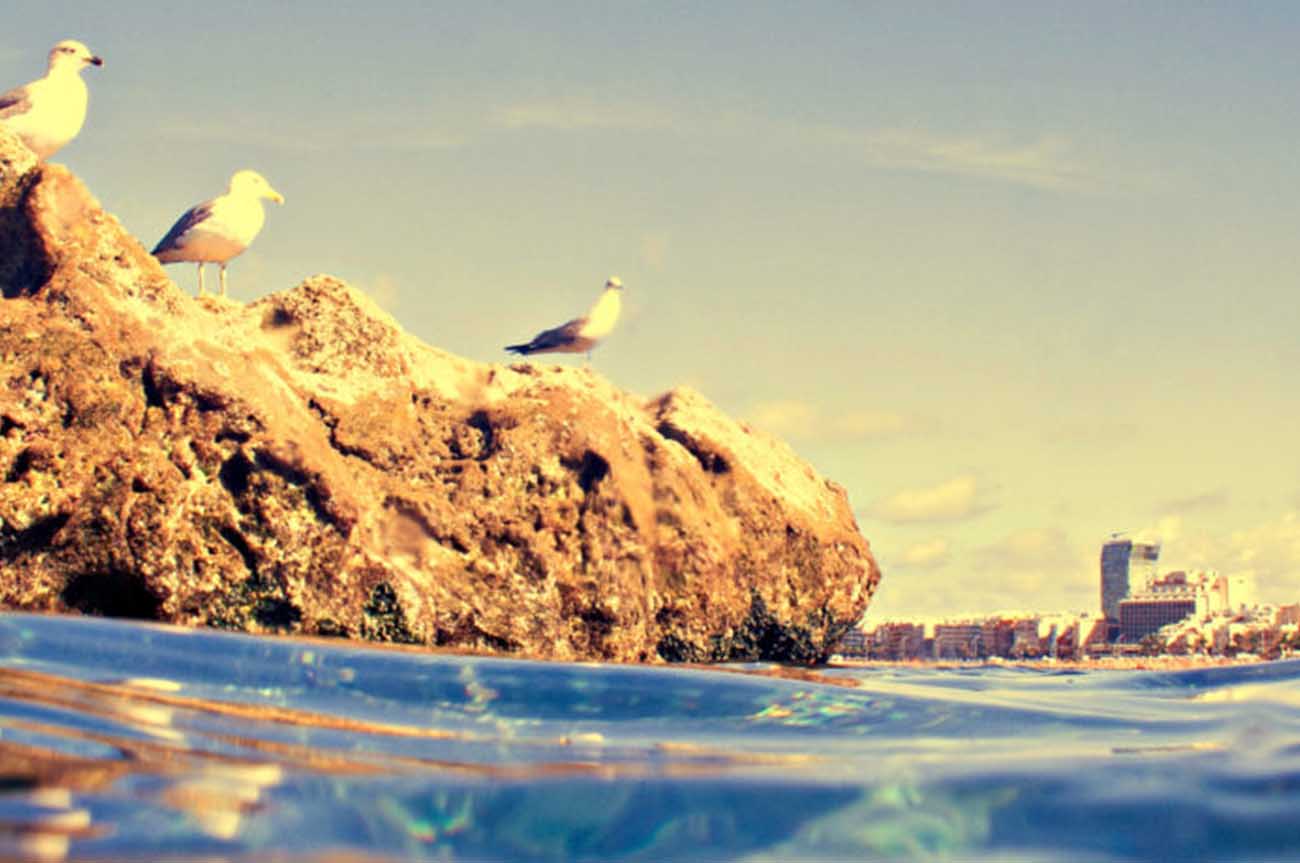 Resorts and beaches go hand in hand on Gran Canaria. The former developed because of the latter. There are 80+ beaches on Gran Canaria and around a quarter of these are resort beaches.

Gran Canaria's beaches are spread over 14 municipalities. Most of the resort beaches are in the touristy Mogán and San Bartolomé  de Tirajana. As you'll discover when we unveil our top 10.

Before the advent of package tourism, capital Las Palmas de Gran Canaria was the island's original resort. And Las Canteras' 2.8km stretch of golden sand makes it the longest beach on the island. And a great incentive to head north along the GC-1.

At 2,710 metres long, Maspalomas is Gran Canaria's second longest beach. What's more, it's a mere 10-minute drive from our Salobre villas. Walking along this deep-south playa, you might well got a shock from stumbling over the nudist section slap bang in the middle of it.

The Maspalomas dunes are more than just reminiscent of the Sahara. That's because the wind has transported these grains from this famous desert to one of Gran Canaria's most famous beaches. Look out for the Faro de Maspalomas, a rather striking lighthouse, and the Charca de Maspalomas, a lagoon which provides a temporary home for migrating birds.

Think of Playa del Inglés and you'll inevitably think of the resort. Where a mad-for-it 18-30 crowd dance the night away in 70s-style shopping centres. Yet there's been some gentrifications, with new developments designed to blend in with the natural surroundings rather than jar with them.

Playa del Inglés, the beach, is one of the most beautiful on the island. And at just 10 metres shorter than neighbouring Maspalomas, it's Gran Canaria's third longest beach. Playa del Inglés takes its name from a British tomato farmer who grew his crop down there before transporting them by camel train up to the east coast for export.

Despite fronting the timeshare complex of the same name, the south-west's Anfi de Mar is open to all. On weekends, arrive early to secure a free parking space opposite Anfi rather than having to pay for the privilege of using the resort's car park. An artificial beach leads to totally tropical turquoise water which is family friendly as it's wave-free.

Time your arrival to Bahia Felíz (Happy Bay) poorly and you might be more sad than glad as you'll encounter a mere strip of a beach. But as the tide goes out, your frown will be turned upside down as the playa gets sandier the wider it becomes. Many bypass Bahía Feliz on the way to Playa del Inglés and beyond, but turning off the GC-1 sooner rather than later will be rewarded with an early shot of southern comfort.

Gran Canaria's second city Telde has eight beaches in total. The only one attached to a resort, however, is Melenara. The beach's short promenade is home to some of the municipality's best fish restaurants if you want to sample the catches of the day.

350 metres long, this east-coast beach is home to a children's playground. Look out for the street signs too which display Telde's coat of arms alongside the Idol of Tara, the fertility goddess of the canarii who occupied the island before the Castilian invasion in the 15th century. Not forgetting a statue of Neptune sculpted by Telde-born, Madrid-based Luis Arencibia Bethencourt.

The Atlantic is at its most pacific as it meets this Mogán beach. To the extent, that having a swim here is not unlike stepping into a giant bath. The comparison to your tub at home is complete with the water temperature tending to be around the 20°C mark.

Amadores is home to beach clubs which offer fun when the sun goes down as well as when it's at its brightest. There's also a mini water park on the beach itself, with rides and slides to keep your kids entertained. Along with a promenade featuring more family-friendly bars and restaurants.

Water shoes are advisable for entering the water at Puerto de las Nieves, Agaete's coastal resort and port. For this pebbly beach, with amazing mountain views, lacks the sand of resort beaches. Whether it be the artificial powder you'll find on the likes of Anfi and Amadores or the natural granules you'll discover on such beaches as Las Canteras and Maspalomas.

Puerto de Mogán's known as Little Venice because of its mini network of canals. But its 190 metres of beach is one of the most ideal locations on Gran Canaria to work on that tan of yours. Why? UNESCO rate the microclimate here one of the world's best.

If Playa del Inglés the beach, let alone the resort, is too lively for you; there is an alternative close at hand. Meloneras is one of the classiest holiday spots on Gran Canaria, with the greatest concentration of five-star hotels on the island. There are snazzy boutiques where the price tags reflects the designer labels on sale.

Yet the beach is open to all. And its near half-km stretch of sand is one of the quietest beaches in touristy San Bartolomé de Tirajana. Not exactly far from the madding crowd, it's nevertheless an oasis of calm in resortville.
Did you like this article? Share it!
PreviousNext