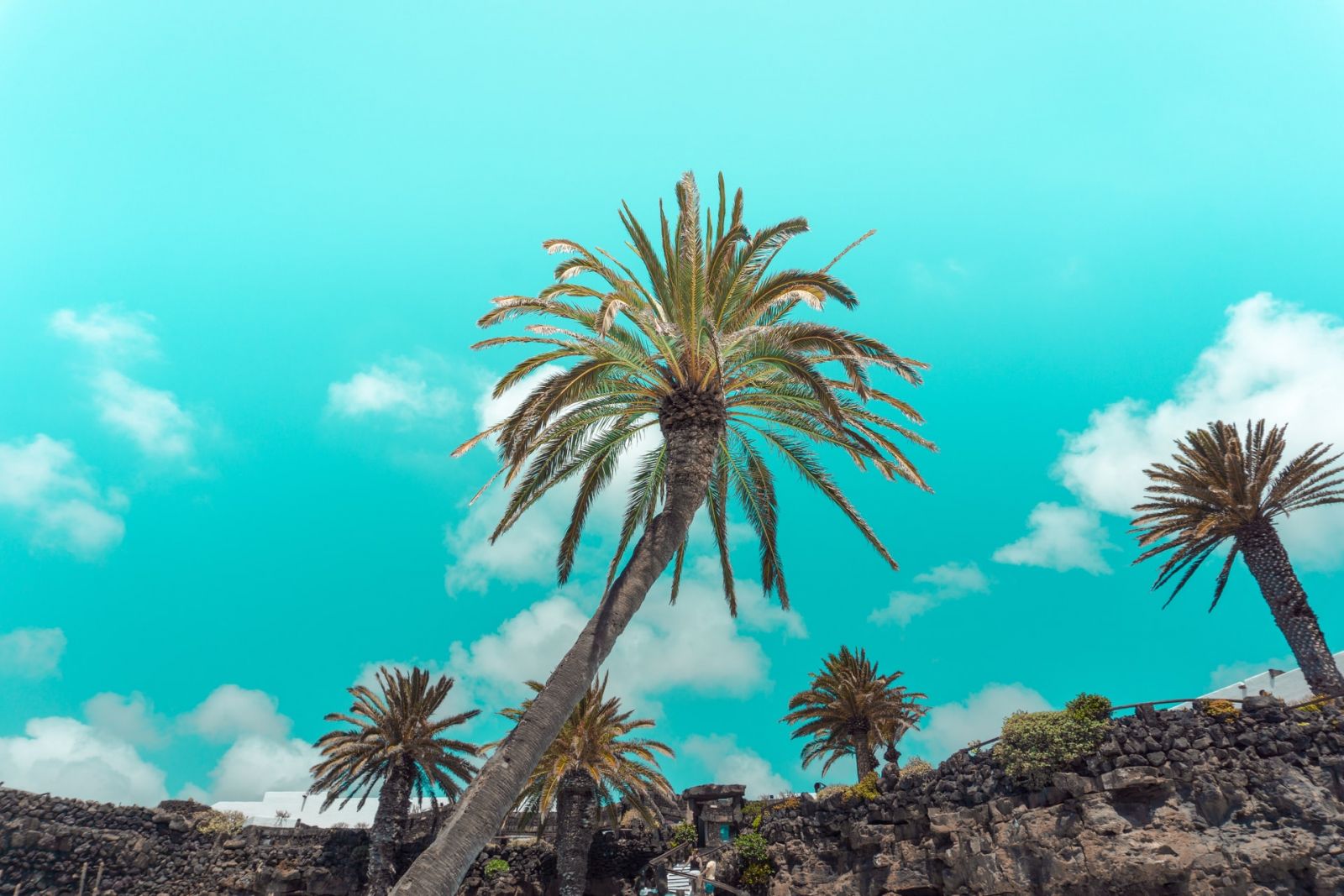 Know everything about the Canarian Palm Tree

The Canarian Palm Tree (Phoenix canariensis) is one of the 2350 sorts of palm trees you can find on the whole world and it is also the only endemic species in the Canary Islands archipelago. It is the pride of all habitants of the island.

This large palm belongs to the Phoenix family and with 13 species in common on the warm continents, it has separate sexes and a thick trunk that can grow up to 30 metres.

It is decorated with rhomboid scars that appear when the leaves fall off. The upper part is protected by leaves and fibres that last for years until they fall off.

It is undoubtedly the palm tree with the most leaves in the treetop, as it can form more than 50 pieces. Each of them has up to 400 segments on two levels that can rotate up to 90 degrees.

The leaf segments that are closer to the trunk have changed over the years and have become more and more solidified, turning into strong thorny leaves that are like a tangle of several knives that envelop and protect the bud. Thus its protective mantle is probably the most aggressive of the palm family.

The root system is widespread and there is no main root. This palm tree has thousands of fibrous roots whose diameters do not grow over time, making it possible to exploit underground water reservoirs, withstand short periods of waterlogging, consolidate the substrate and anchor in uneven layers.

In addition, it is a specimen that can live for up to 3 decades.

These palms are dioecious so that they are easy to differentiate. On the one hand, the female produces larger and open inflorescences with widely spaced flowers that become fruits. On the other hand, the male sex has smaller, closed inflorescences that are densely covered with flowers and produce abundant pollen.

They show a certain sexual dimorphism in adult plants, something very strange in palm trees and plants in general: the male sex usually has a more compact and "flattened" shell that is compressed in the vertical axis, and the female sex a more open and rounded shell.

The flowering period varies and is usually completed before the cold and humid seasons arrive, when wind and insects transfer the pollen to the female. The sweet and colourful fruits ripen in the dry and warm periods and are scattered by some birds that eat them whole.

Other birds of prey, on the other hand, only eat the inner part of the fruit and drop the seeds next to the trunk, a place where they do not bloom. The fruit is sometimes infested by weevils that open small channels in the seed and die when the embryo is reached.

Apart from the fact that they can germinate immediately, the seeds of the Canary date palm withstand more than a year of cold (+4º C) and several months in the dry soil of the natural environment, which is very rare in a family characterised by the short duration of its seeds.

The method of germination allows the seedlings to begin their life a little buried and protected from the drought of the first summers. In this way, the seed produces a "strand" called the cotyledonous leaf stalk, which grows downwards in the soil and at the top of which is the embryo from which leaves and roots emerge.

Over the course of about a year, the cotyledonous petiole acts as a kind of umbilical cord between the seed and the seed. Germination is followed by a long consolidation phase, during which the young plants increase the size of their leaves and form the base of the stem.

Consolidation takes 5 to 8 years and ends with the first flowering, which marks the beginning of adulthood. In this species, sexual maturity is reached very quickly, as the palms can flower at half a metre from what looks like a trunk. This short stem is not really a trunk, as you can only see the base of the leaves that form the heart of the Canary Island palm.

In this first flowering, the tip is still at ground level, just like the actual trunk of these young adults, and resembles a disc that has the final diameter but is only a few centimetres high.

When they have reached sexual maturity and thus the final base diameter, the trunks begin to grow upwards. Their speed varies and can be between 5 and 40 centimetres per year, depending on conditions. As with most palm species, the trunks do not grow in diameter over time.

Thus, despite having the same or similar diameter, the young palms look like an "oversized" trunk, while the larger palms seem to have "slender" trunks. In the Canary Island species, this optical illusion is reinforced by the fact that the young specimens have a trunk that is enlarged by the remains of the leaves covering it, which take decades to fall apart.

They grow all year round, but the concentration is on new leaves which takes place simultaneously with the climate change.

Its production is limited to the island of La Gomera and it is a supplement that goes well with various desserts such as frangollo, quesillo, roasted milk, goat's cheese, curd cake, etc.

In recent years, palm honey has been included in the new trends of Gomeranian and Canarian cuisine and even outside the islands. It can be found as an accompaniment to meat in the preparation of various sauces.

Other Palm variations: The Date palm and their hybrids

On the Canary Islands there is a similar variety of the same species: the date palm (Phoenix Dactylifra). This palm tree has some morphological characteristics that will distinguish it from the typical Canarian Palm, among which the thinner (30-40 centimetres) and higher (up to 20 metres) trunk, a broader and less dense crown with light green leaves, stands out.

The leaves, which can be up to 6 metres long, have half the number of leaflets of the Canarian Palm and their surface is covered with a whitish, waxy powder. Towards the base of the leaf, the leaflets turn into very small thorns and offer shoots at their base.

The origin is difficult to determine, as the cultivation has spread over thousands of years to all warm areas of the world. The presence of the date palm in the archipelago is also controversial, as it is not clear when it was introduced into the Canary Islands. Perhaps it came with the first settlers or even after the Castilian conquest.

It is one of the most cultivated fruit trees in North Africa and the Middle East and is used as a date producer. This cultivation, which has lasted for more than 5,000 years, has resulted in dozens of different varieties of date palms as well as an endless number of crossed specimens and very different morphological forms, both artificial and natural.

Recently, its presence on the island has been increasing, as it has been imported as an ornamental plant to many places around the world, which has led to a very significant spread and presence.

Due to their close relationship, the date palm and the Canarian Palm, like most species of the genus Phoenix, cross naturally, resulting in intermediate forms with different degrees of crossing, which are differentiated according to the dominance of the parents.

Due to the morphological similarity and phylogenetic proximity of the two species, it is currently very difficult to classify and identify morphologically unambiguously the truly Canarian Palm from hybrid specimens, especially in garden and urban areas where the two species coexist.

Years ago, the Government of the Canary Islands adopted DECREE 62/2006 of 16 May, laying down measures to promote the protection, conservation and genetic identity of Phoenix canariensis. This decree sets out the restrictions on the use of the various species of palm tree considered to be wild, cultivated, exotic and palms of recognised genetic purity.

In summary, the Canarian Palm is perhaps one of the most representative and relevant plants of the Canary Islands, since the species and its occurrence have always been a characteristic and outstanding element of the landscape.