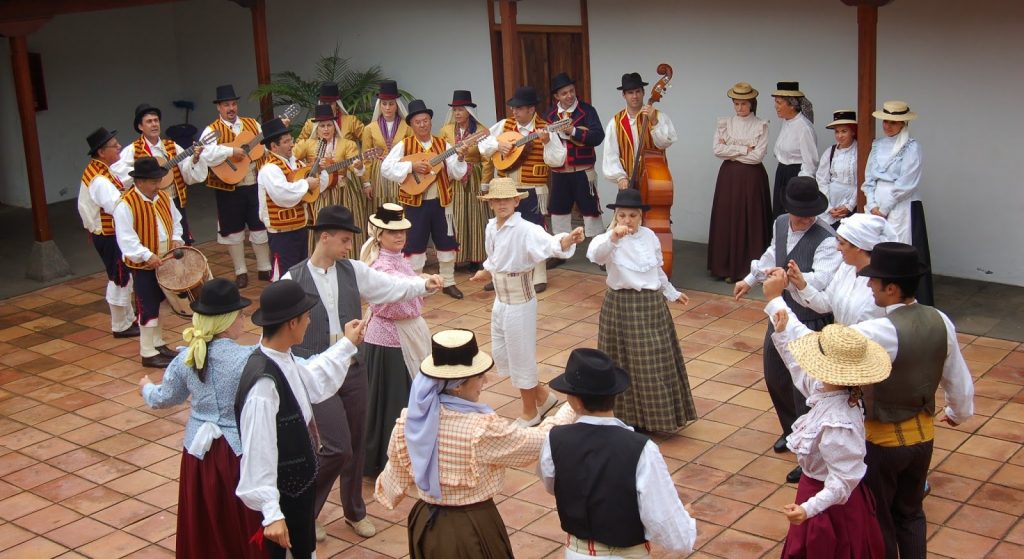 Everything about Canarian folk music

Canarian folk music is the result of a mixture of musical styles of the indigenous people, the conquerors of the Canary Islands from the Iberian Peninsula, but also of the Caribbean, brought by those who migrated back to the Canary Islands.

The diverse Canarian music of the archipelago is the result of the first fusion of cultures and was then expanded with the influence of European traders (Genoese, Jews, Flemish, British) and flows of people between the Canary Islands and the New World.

The folklore of the island is well described in a quote by Pedro Hernández-Guanir:

"Like a tree, he takes root in the world of the Guanches. Its trunk is the result of various foreign influences [...]. However, the branches are a product of the temperament and psychology of the Canarian people. They have managed to give it an original, rhythmic, cheerful, humorous and melancholy touch... just like their own personality. The final result of this folklore is ultimately different from the one that gave birth to it. It is like the tree, [...] different from the seed that gave birth to it."

Instruments of the Canarian folk music

Both, the history and the geographical position of the archipelago have, over time, allowed external influences to reach the islands. It is therefore easy to understand why musical instruments are used from outside the archipelago. The classification of instruments used in Canarian music is the following one:

Canarian music would not be the same if the different songs of the archipelago were left out.

There is no doubt that the environment determines the life of the villages and shapes their artistic and musical performances. It is therefore not unusual for the Canary Islands to have a great wealth and variety of music. Its contrasting landscapes have given rise to various folk dances.

A dance that is danced freely because of its joy and beauty. It used to be a dance with a choreography similar to the jota (Spanish dance), in which one had to jump, whereby skill and rhythm were required, since the castanets were played simultaneously. Now, as the result of a series of transformations, the Isa is characterised by its aesthetics, as the group forms a series of roles, bridges, chains and figures.

Another dance of Canarian music is danced very sensitively with courtly forms. It follows the old tradition of the change of partners by the woman, who returns with her original dance partner after a series of steps. The folías canarias are danced in groups of single and independent couples. It is not allowed to go to the dance floor before the musicians indicate this, so that the couples can go into a dance position.

So there is a musical introduction, the man takes a step forward and bows down in front of the woman who at first rejects him while dancing, taking one step backwards and another to the side. Then follows a change of partner. When the man steps back the woman steps forward as if to reconcile and so on but without touching each other.

Dance in a collective of five, six or more couples in which they form circles, figures, tunnels and braids as in the Isa, accompanied by calm music. The choreography consists of the couples forming a choral constellation with the man on the left opposite in front of the woman and both standing with their backs to the other couples.

They begin by dancing in the same place for several beats, and when half a turn is indicated, the men on the outside of the choir and the women on the inside turn around to dance another series of bars with the opposite couple.

The Canarian folk music and its groups

There are many groups of Canarian folk music that have taken it from the island to a different level, giving it its own personality over time and taking on the characteristics of the Canarian people. This has resulted in a style that is much more varied than the original.

A band of Canarian folk music coming from Tenerife and possibly one of the biggest representatives of the traditional music of the Archipelago with almost 70 records and a valuable sound archive including parts of the island’s legacy and own songs.

Another Canarian folk music group which was born on Gran Canaria and which consists of almost 40 singers and instrumentals with a great discography and important recognitions. Their work in the folk roots is combined with the search of new forms of music and stage. The way of travel through different countries and the link that connects the archipelago with Latin America helped to expand their repertoire with music from other places.

In conclusion, we can say that the Canarian music is an engine which creates relations and which connects people in different moments of their life. The result is a variety of cultural, European and American influences that have enriched the Canary Islands’ musical culture with their history without forgetting the rhythm of the indigenous people.

Source: Government of the Canary Islands