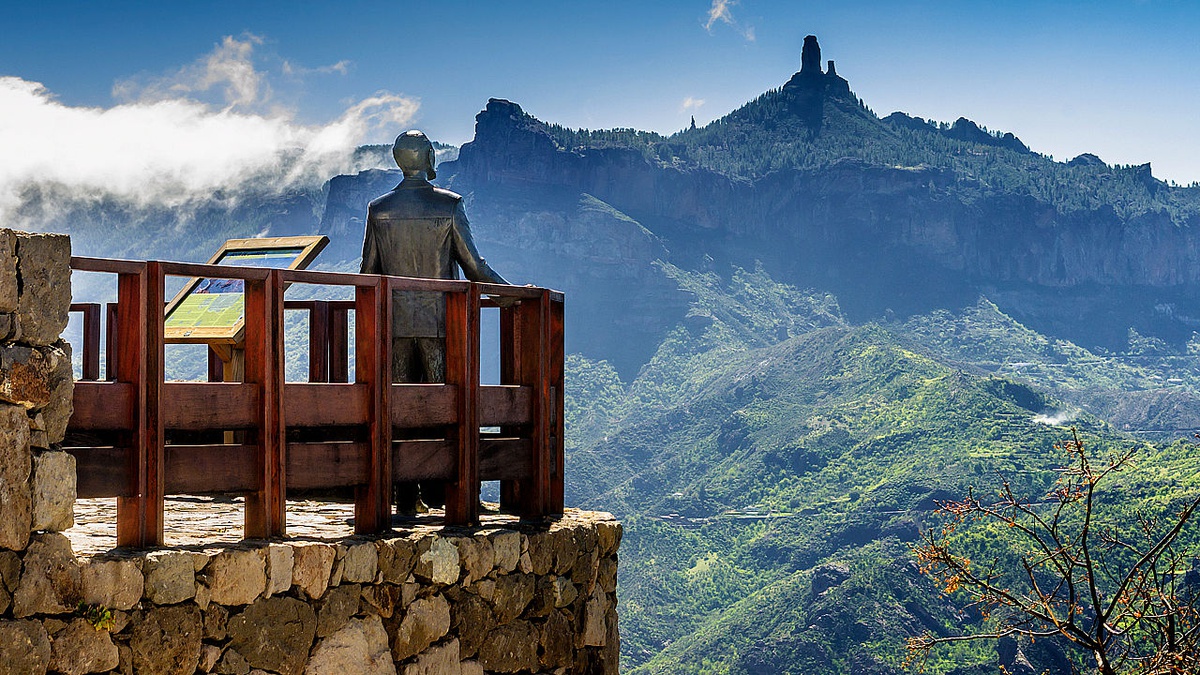 The viewpoints on Gran Canaria are impressive points across the island, from which you can enjoy wonderful views that reflect the beauty of an incredible and unique place.

Therefore, it is not surprising that there are many viewpoints all over the island where you can stop and admire the spectacular landscape of this island, also known as the “miniature continent”.

The difficult orography of Gran Canaria is due to its volcanic origin, which has led to the formation of countless concentric ravines where you can admire a variety of flora and fauna.

The variety of landscapes on the island allows a great variation in temperature, which means that you can see on the same day sunshine in one part, rain and fog in another one. But you can also be dry without any plants, like in the south of the island.

Gran Canaria is a true melting pot of different natural characteristics and the many viewpoints allow the beholder not only to enjoy the view but also to see how two different climates meet.

Which are the best viewpoints on Gran Canaria

Without digressing any further, we suggest five of the most spectacular viewpoints on the island. Don’t forget to take your camera with you to catch that unique moments.

In front of it there are old volcanic remains, which in their time formed the centre of the island and had an indefinable height. The two giants Roque Nublo and Roque Bentayga, which watch over the island, can be seen very well from here.

From here, countless vertical ravines open up, ending in the sea, forming a great mixture of materials, colours, shapes and structures, and forming part of the World Biosphere Reserve of Gran Canaria, declared by the UNESCO on 29 June 2005.

The western edge of the Macizo de Amurga houses another viewpoint on Gran Canaria, which is even more impressive. To be more precise, from there you can see the Fataga Gorge, with its volcanic traces pointing to its origin, and the typical flora of a semi-desert of balsamic spurge (tabaiba) and Canary spurge (cardones).

At the end of the ravine, Canary Island palm trees (which make up the rest of the original flora of the area) and an authentic botanical rarity that cannot be found anywhere else: the Canary Island dragon tree (drago canario).

Nearby there is an archaeological treasure called Necrópolis de Arteara, where you can find burial sites located on a deposit of stones that originate from the fall of a large cliff.

Right next to Morro de la Agujereada, the highest point of the island with 1956m above sea level, there is an impressive viewpoint from which you can see a large part of the island and the neighboring island Tenerife.

Even though it may not seem so at  first sight, this pine forest was planted in the middle of the 20th century to spread the flora and fauna of the island which is urgently needed, considering how much is being built nowadays.

The name comes from the three nearby wells, which were constructed in the 17th century and whose purpose was to store the fallen snow in winter to use it later. This viewpoint on Gran Canaria is not to be missed.

The small village of Artenara, in the mountains of the island, is home to one of the most beautiful and picturesque viewpoints in Gran Canaria and was built in honour of the Basque writer who belonged to the Generation of 98. To understand its beauty, you only have to read what he wrote:

"The scenario is impressive. All these black walls of the great cauldron, with their crenellated crests, with their upright rocks, offer the appearance of a Dantesque vision. It could not be any different from the cauldrons of hell that the Florentine visited. It is a tremendous tremor from the depths of the earth; it all seems to be a petrified storm, but a storm of fire, of lava, more than water."

A spectacular viewpoint between the former road between Agaete and La Aldea de San Nicolas. Known for its incredible views of the sea and the cliffs, which is called “dragon’s tail”.

It is believed that this western part of the island has experienced an immense collapse in the past, which led to volcanic flows that rose hundreds of metres in height.

You also have a perfect view of the neighbouring island of Tenerife with its highest mountain, the Teide, which is also the highest point in Spain at 3718 metres. Highly recommended at sunset.

The best lookouts in Gran Canaria

With this list of viewpoints on Gran Canaria you can add some more points to your list of what-to-see-on-the-island and enjoy your stay in a different way. Can you manage to see them all?