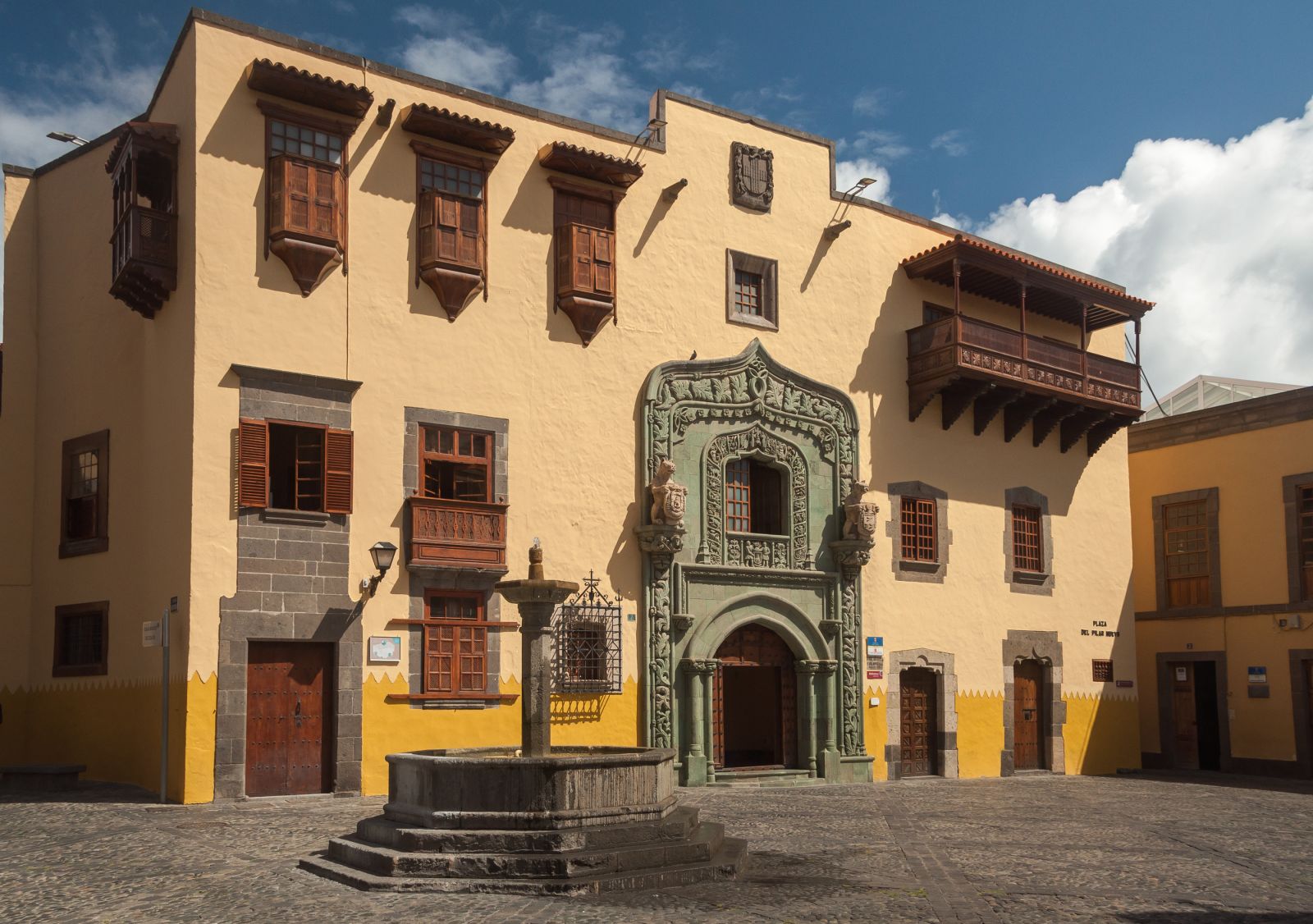 Every city has its foundational district, where everything began. In the case of Las Palmas de Gran Canaria, this place is the district of Vegueta.

This neighbourhood was built at the end of the 15th century and, 500 years later, it became the largest and most populated city in the Canary Islands. Nowadays, it’s one of the main tourist attractions of the capital city, along with the Triana neighbourhood.

In today's post, we want you to get to know the heart of Las Palmas de Gran Canaria. We offer you a walk through the most important and picturesque corners of the neighbourhood Vegueta.

It all began in 1478, with the arrival of Captain Juan Rejón, sent by the Crown of Castile, who arrived at the coast of Gran Canaria, where he established the first settlement prior to the conquest of the Canary Islands.

Together with his troops, they set up camp in the area of the Guiniguada ravine. Three tall palm trees were placed in the camp to alert ships coming from outside the Canary Islands to their presence.

It was given the name of Real de Las Palmas. A wall was built around it and one of the most important ports of the Crown, the port Puerto de la Luz, was born.

For three centuries, the population of the neighbourhood lived inside the walls, becoming the first neighbourhood and population centre of the island, extending beyond the Guiniguada ravine to the Triana area, reaching as far as the San Telmo park.

It wasn’t until well into the 19th century that the city opened its walls and began to expand towards la Isleta.

What to see and do in Vegueta

On your visit to the district of Vegueta there are places you can't miss and which are a must-see.

If you want to enjoy your experience in Vegueta to the fullest, you can visit the places we’re going to show you in one day, as they’re all in the same area and the distances you have to travel to them are minimal.

Here are 5 things to see and do in Vegueta in one day:

Picture by Hert Niks on Unsplash

The city's greatest landmark is located in Vegueta. The construction of the Cathedral of Las Palmas de Gran Canaria began in 1497 and was completed at the end of the 20th century.

Its façade has a neoclassical, Gothic and Renaissance style, which is the result of the different periods in which it was built.

Just opposite you can find the square Plaza Santa Ana, which was built in the 16th century, making it the first main square to be designed in Spain.

Just a few metres from the Cathedral there’s another beautiful emblematic building. The Casa de Colón is almost 500 years old and is now a museum.

It has one of the most important art collections in the Canary Islands, focusing on studying and disseminating the history of the city and its relations with America.

Hermitage of the Holy Spirit

The Plaza del Espíritu Santo (the square of the Holy Spirit) is located next to the Casas Consistoriales, the former seat of the town hall until 1979. It’s one of the noblest and most stately buildings in the city.

The hermitage dates back to 1540 and today it can be visited inside. The square has a fountain covered by a stone pavilion, one of the best preserved covered fountains of Hispanic architecture.

It seems as if time hasn’t passed in this street. It has the oldest houses in the neighbourhood with its beautiful façades and 15th century courtyards.

Strolling along this wide and winding cobbled street allows you to take a historic trip back in time.

One of the most outstanding buildings is the Centro Atlántico de Arte Moderno (Atlantic Centre of Modern Art), which preserves its old appearance. It has more than 2,600 works in its permanent exhibition.

One of the best ways to round off your stroll through the Vegueta neighbourhood is to enjoy the best restaurants in the city.

In the street Mendizabal you can find a wide variety of restaurants, such as la Champiñonería, El Herreño or María Jimenez.

On the other hand, if you want to enjoy the best and most varied menu of local and imported beers, in Te lo Dije Pérez you can enjoy a pleasant atmosphere on its terrace.

So much for our particular journey through Vegueta through time and history. A neighbourhood that, at every step you take, reveals secrets and stories of how the largest city in the Canary Islands grew to what it is today.

In short, if you’re visiting the island, don't hesitate to visit Vegueta, one of the most beautiful and historic districts of the Canary Islands.