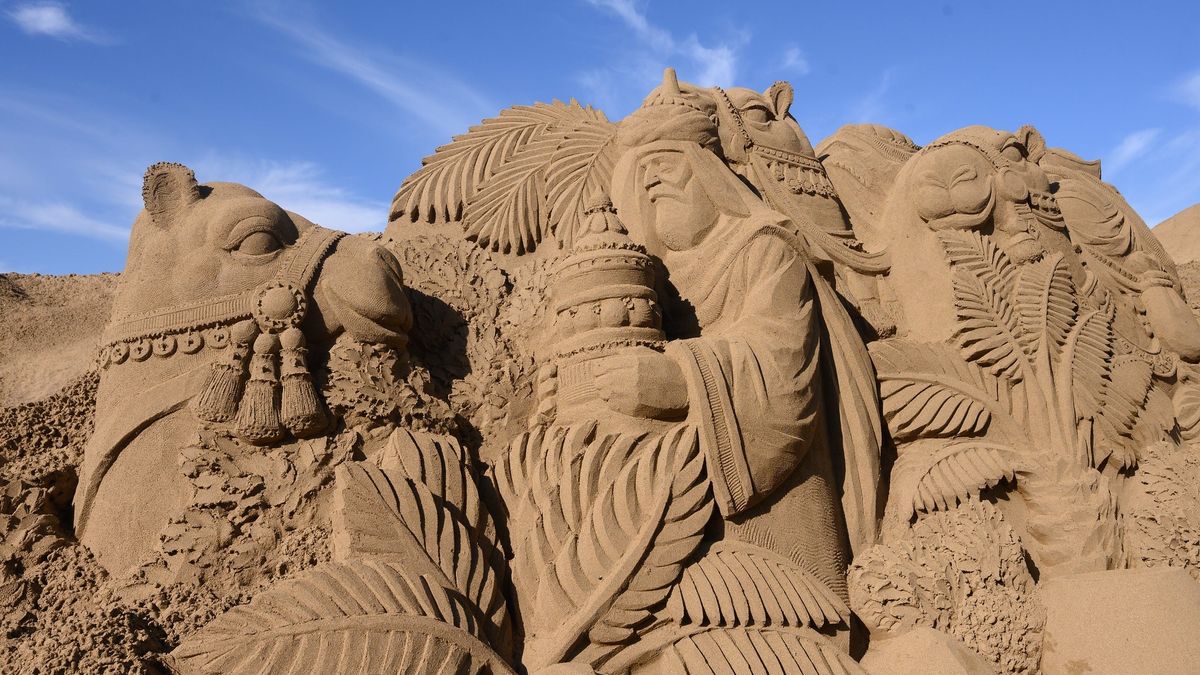 With the arrival of the month of December, a magical moment full of tradition takes place in every corner of the Canary Islands. In this case, we're talking about the traditional cribs or nativity scenes. Of all of them, there's one that stands out the most, and that's the sand nativity scene in Las Palmas.

Located in the iconic Playa de las Canteras, in the heart of Las Palmas de Gran Canaria and considered one of the best urban beaches in Europe. Its natural charm lies mainly in having a long stretch of golden sand which is bathed by the sun 365 days a year.

It's one of the new wonders and main tourist attractions of the city. Being very close to the beach avenue and having all the services nearby, such as shops, restaurants and cafés, gives it an extra plus.

It's undoubtedly the perfect place to set up this spectacular sand nativity scene when Christmas is approaching, which, by the way, is totally different from the rest of Europe: no rain, no snow, mild temperatures and sunshine practically every day.

The sand nativity scene in Las Palmas will celebrate its sixteenth year this year, consolidating its position as the main Christmas event in Gran Canaria. Thanks to the ingenuity of 8 sculptors who, one day, decided to create this ephemeral work of art that we can enjoy here on our island.

The sand nativity scene in Las Palmas features sculptors such as Enguerrand David from Belgium, Marielle Hessels from Holland, Sanita Ravina from Lithuania, Leonardo Ugolini from Italy, Sue McGrew from the USA, Aleksei Rybak and Vadim Gryadov from Russia and Karen Fralich from Canada, the artists who have created this innovative representation of Christmas with their own hands.

Apart from the contribution of this group of sculptors, the nativity scene is promoted by the Town Hall of Las Palmas de Gran Canaria (Ayuntamiento), which offers a space on the beach near the Plaza Saulo Torón, very close to the la puntilla.

However, for the creation of these figures (which are moulded with water and the hands of the artists, and who can reach a height of more than 5 metres), more than 200 tons of sand are needed.

With its 1,500 square metres, the crib is considered to be the largest open-air crib in Europe. Every year, from its opening at the beginning of December until it closes after the Three Wise Men's Day, it's visited by nearly 200,000 people.

An example of Canarian traditions

All the creators of the sand nativity scene in Las Palmas make representations of the most traditional scenes of any nativity scene we know: the Annunciation, the Nativity, the visit of the Three Wise Men or the recreation of the stable where the baby Jesus was born.

However, these artists have decided to make different nods to landscapes or customs of the island, such as the Roque Nublo, the Tejeda caldera or the representation of the endemic plants of the islands.

It's an excellent way of uniting these two traditions and forming an authentic tradition that's consolidated with the passing of time.

A nativity scene for the whole family in Gran Canaria

The sand crib of Las Palmas has an added value, as well as hosting visits for tourists, local people and even school visits, it also has a series of workshops dedicated to the entire family.

The workshop consists of learning how to mould sand, which is a great way to involve parents and children in a fun and creative joint activity.

In addition, before or after enjoying this wonderful workshop in the sand crib of Las Palmas, you can choose to enjoy a day at the beach with the rest of the family. As you know, December in the Canary Islands is synonymous with good weather, so don't hesitate to take a dip and soak up the sun.

The sand nativity scene on Las Canteras Beach has established itself as an icon of Christmas. However, in recent years it has wanted to go further and has offered its most charitable side.

In this case, we must highlight the charitable purpose of this work, since the money that has been generated around it, more than 25,000 euros per year, is donated to different organizations such as non-profit associations, soup kitchens, etc.

In addition to the money raised, there are also a series of food collection campaigns that visitors bring in and which often far exceed expectations, as for example in the 2020 edition, when more than 380 kilos of food were collected.

The sand nativity scene in Las Palmas kicks off the Christmas festivities on the Canary Islands. From the moment the perimeter where it’ll be built begins to be delimited, the city begins to vibrate differently, and the Christmas spirit takes hold of it.

One of the main reasons why this nativity scene is so well known and popular, apart from its spectacular nature, is because it brings together two elements that together create the perfect combination: tradition and the avant-garde.

Likewise, the avant-garde and creativity of the world-class sculptors who create these marvellous figures have been combined with Canarian traditions, which are united and mimicked with Christmas traditions, giving rise to an artistic material that has deeply influenced Canarian society and the tourists who visit the island every year.

In short, if you’re on the island during the month of December, don't hesitate to visit one of the most important and magical Christmas events in the city, the sand nativity scene in Las Palmas.