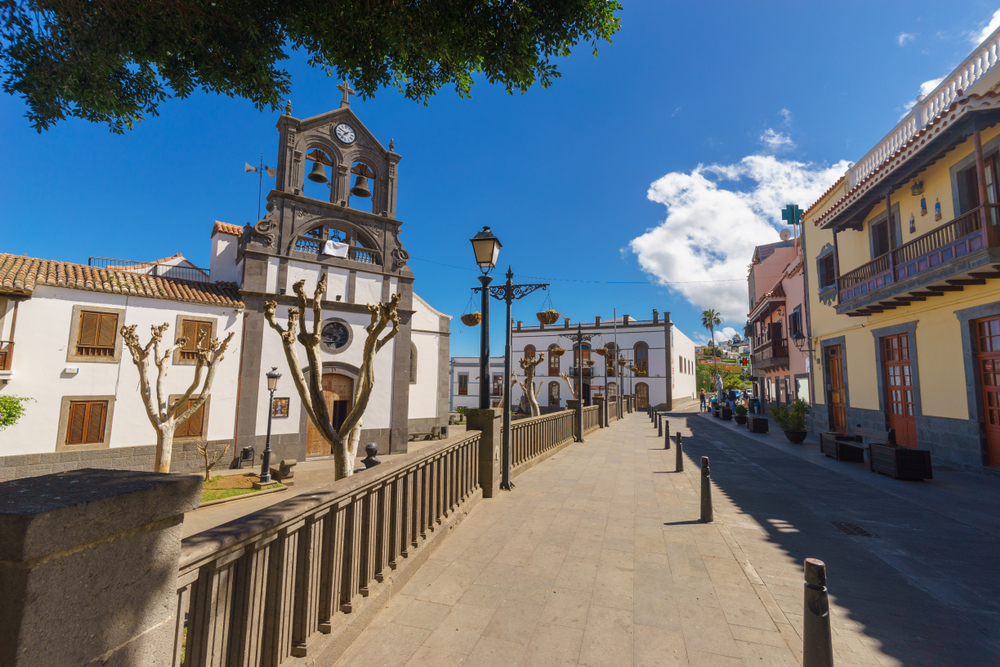 In the north of Gran Canaria lies the charming village of Firgas. Firgas is also the smallest municipality in Gran Canaria. Here, everything revolves around water, as evidenced by the 30-metre-long man-made waterfall in the village centre. The municipality is enveloped by ravines and narrow ridges, and the old town is definitely worth a visit.

The name Firgas comes from the name Afurgad, as the area was originally called by the indigenous people of Gran Canaria. In the centre of the village, you’ll find buildings from the 16th century.

Firgas used to belong to the municipality of Arucas. During the Spanish conquest, the laurel forests Doramas of Firgas played an important role, the remains of which can still be seen today.

Nowadays Firgas lives mainly from agriculture (growing potatoes, livestock [such as sheep and goats], fruit trees and citrus fruits, as well as watercress), the Firgas mineral water bottling station, one of the most famous mineral waters in the Canary Islands, and gastronomy.

What to see in Firgas

The centre of Firgas offers various religious and cultural attractions, such as the famous fountain or the renovated gofio mill.

Ready to discover the charming village of Firgas?

1. The Parish Church of San Roque

This church was built on the ruins of the former chapel Ermita de San Juan Ortega, which was erected in the 17th century. Although it was inaugurated in the mid-19th century, the current construction dates from the end of the 19th and beginning of the 20th century.

The church was dedicated to San Roque, the protector against the plague and other epidemics. The church itself is a mixture of architectural styles, with beautiful stained glass windows. The ceiling panelling of the nave, the main portal and some important figures of saints (such as San Juan Ortega, San Francisco or San Cayetano) have been preserved.

The image of San Roque and San Juan Ortega are now in the Diocesan Museum in Las Palmas. The monument that can be seen today dates from 1905.

Nearby is the fountain, made from stone from the local quarry, inaugurated in 1995. This fountain is meant to represent the abundance of water in the village.

2. The House of Culture

One of the most important buildings is the Casa de la Cultura (House of Culture), built in 1872. It used to be a hotel and inn, particularly frequented by English tourists who took advantage of the spa in the Azuaje Valley. Today it houses a banqueting hall, a public library and various exhibition halls. The building has also served as a town hall and school.

Behind the church of San Roque is the town hall. It’s a neo-Canarian building that dates from the 1940s. Next door is a charming square with beautiful views over the north of Gran Canaria.

The Paseo de Canarias and the Paseo de Gran Canaria in the centre of the town were originally called Calle Real del Centro. A 30-metre waterfall made of the local stone was built in the pedestrian areas, ending in a monument. In addition, one side of the paseo was decorated with 22 municipal emblems, the island's emblems, and a typical image. The images were made from tiles from Seville.

Above the irrigation canal of the Heredad de Aguas of Firgas and Arucas is the renovated gofio mill of Firgas (also known as Molino del Conde). The mill dates back to the 16th century, making it the oldest mill still (or again) in operation on the island of Gran Canaria. Next to it is the miller's house, the old granary and the corn and maize roastery. This is where the famous Canarian gofio was made. A small museum has been set up in the former grain store. The mill can be visited until 2 pm.

Breathtaking views of the north of Gran Canaria

Looking for accommodation near Firgas? Stay in one of our rural secrets if you love country houses and nature.

We recommend Villa Arucas 10, a beautiful 5 bedroom property in a rural setting in the north of the island, with easy access to all amenities, private pool and sea views. Or the La Iglesia San Mateo holiday home, a cosy rural accommodation for 4 people in the historic centre of San Mateo, one of the most traditional villages on the island. It’s only 20 minutes by car from the centre of Las Palmas.